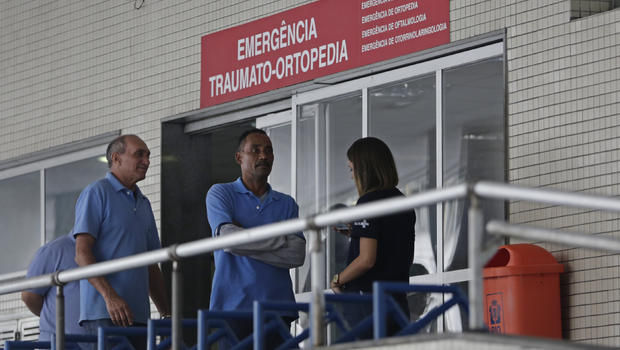 Why are we having the Olympics in Rio again? First the Zika virus, now gunmen shooting up the hospital tourists are recommended to use while there.. Who thought having it in Rio was a good idea?

A group of heavily armed men stormed a Rio de Janeiro hospital Sunday to free a suspected drug trafficker, sparking a shootout with officers that left a patient dead and a nurse and an off-duty policeman wounded.

The attack took place at Hospital Souza Aguiar, one of the medical facilities recommended for tourists seeking emergency treatment during the upcoming Olympic Games.

At least five attackers stormed the hospital before dawn and freed the 28-year-old suspect, who was being treated for a gunshot wound, Rio police said in a statement. As many as 15 other gunmen were outside during the attack, witnesses told police.

Investigators were studying security camera footage, and Rivaldo Barbosa, head of the state’s homicide unit, said two of the assailants had been identified.

“This was a carefully orchestrated attack,” Barbosa told reporters outside the hospital. “It was a bold action that will not go unpunished. It is unacceptable.”

Souza Aguiar is one of five hospitals designated by the city to treat tourists during the sporting event because of its proximity to the famed Maracana Stadium, site of the opening ceremony on Aug. 5. It’s also on a U.S. Embassy list of medical facilities recommended for travelers to the games.

Fabio Melo, a sergeant who was guarding the suspect in the hospital, said he feels vulnerable to attacks as Rio de Janeiro state is increasing officers’ shifts.

The state declared a financial disaster on Friday largely because revenues from oil royalties have plummeted as a result of low crude prices. The government wants more freedom to manage scarce resources in areas such as public safety, health care and education as it wraps up Olympic projects and beefs up tourist services during the games.

“People in our line of duty go through these kinds of different experiences. Thank God I was not injured and I was able to help my co-worker,” Melo told reporters. “But we are defenseless. I am defenseless, you are defenseless and the whole population, too.” More