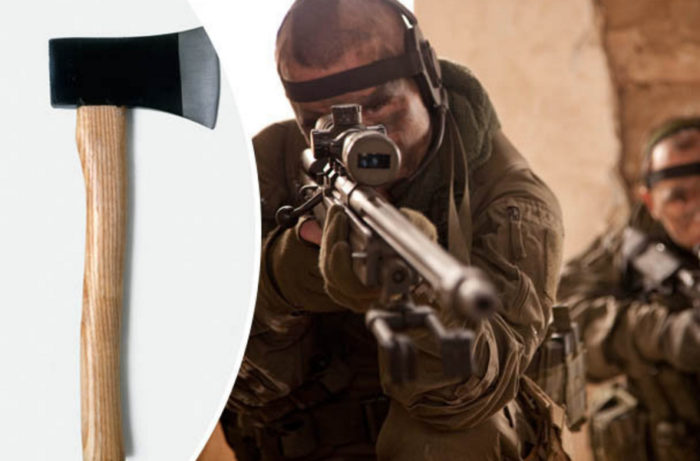 Great job! I especially like that “no prisoners” thing. More pretty please.

The elite trooper slayed the jihadi with a blow to the skull after his gun jammed.

He was part of a joint British-US task force which carried out the rescue mission in Syria last month.

The covert operation was launched to free girls being forced to wed members of the Islamic State group.

Those who refused to co-operate were raped and dipped in acid or crucified, claim senior military sources.

Intelligence officials heard of the atrocities – which took place in northern Syria over the summer – from terrified locals.

It is understood pictures and video of the girls being tortured and murdered was handed over. The shocking images reduced hardened members of the SAS and Delta Force to tears.

A British and US special forces team was flown by helicopter to the outskirts of a village which had been taken over by Isis. The soldiers attacked the village in force, with the support of armed drones.

A two-hour firefight then took place. Delta Force snipers are said to have killed up to 10 jihadis, while the SAS assault team killed 15 gunmen.

The SAS blasted Islamist fanatics with automatic grenades launchers. And a drone destroyed two pick-up trucks crammed with gunmen who were trying to escape.

One SAS soldier is understood to have killed one of the terrorists with an axe after his assault rifle jammed when he entered a building. The sergeant, a veteran of Iraq and Afghanistan, was moving through a series of rooms when two jihadis opened fire. He shot one dead but was unable to fire on the other. As the jihadi ran towards him the SAS man picked up a hand axe and killed him.

Once the terrorists had fled or been killed the soldiers began to search for the girls. They found up to a dozen who had been hidden in cellars and attics by their terrified parents.

Our source said: “Members of Isis had been in the area for a few months and had been rounding up pre-pubescent girls who they wanted to become jihadi brides. “If the parents protested they were shot dead or beheaded. Some of the girls ran away but were captured and we received reports that they were crucified or dipped in acid and suffered the most appalling deaths.

“A rescue mission was launched. Up to 30 fighters were killed. Some escaped. There were no prisoners. More