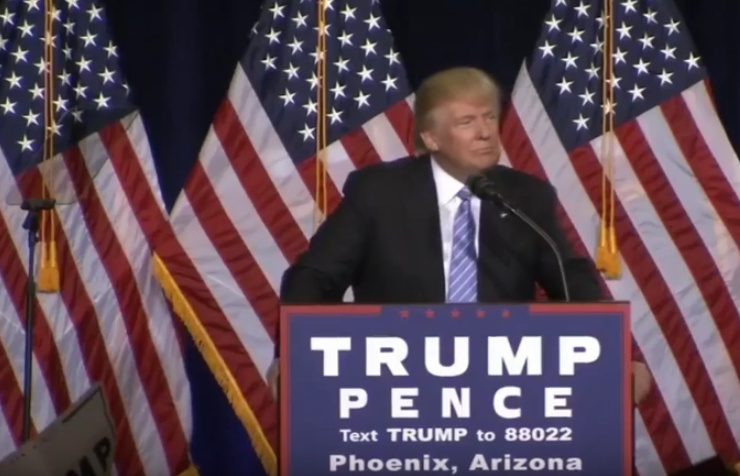 Trump: “Our greatest compassion must be for our American citizens…” crowd chants “USA.”

Trump: "Our greatest compassion must be for our American citizens"; crowd chants "USA" https://t.co/zHPLSsgJty https://t.co/3vCNVBiOza

• Mr. Trump explained his supporters to those voters who are wary of them and their perceived anti-immigrant views. “These are valid concerns expressed by decent and patriotic citizens,” he said. We do not usually hear him speaking like this – in a sense speaking directly to those who fear him as much as the the audience right in front of him.

• Trump ticked through the names of three Americans who were killed by undocumented immigrants. These are staples of his speeches and familiar to his audiences at this stage of the campaign. He has held them up as examples of an immigration system run amok with tragic consequences.

• Trump made the case that elites in Washington and in the media have put the wrong focus on the immigration debate – by emphasizing the plight of an estimated 11 million undocumented immigrants in the country, not the Americans impacted by their presence. “Anyone who tells you that the core issues is the needs of those living here illegally has simply spent too much time in Washington. Only the out of touch media elites think the biggest problems facing American society today is that there are 11 illegal immigrants who don’t have legal status.”

• Here’s Trump’s plan for combating illegal immigration, boiled down to its simplest elements:

2. End catch and release policy for undocumented immigrants and instead return them to their country of origin

3. Have zero tolerance for undocumented immigrants who have committed a crime. He will deport them.

4. Triple number of deportation officers at the department of Immigration and Customs Enforcement.

6. Stop issuing visas to any country where “adequate screening cannot occur” that might endanger national security;.

7. Ensure foreign countries take back deported immigrants from the United States: Mr. Trump said 23 countries refuse to do so

• Comparing himself to Hillary Clinton, who he maligned throughout the speech, Mr. Trump asked: “What do you have to lose? Chose me.” It was an echo of a much mocked question he asked black voters recently. More

You won’t believe who gave props to Trump after his speech… The New York Times! Yes, it really was that great.