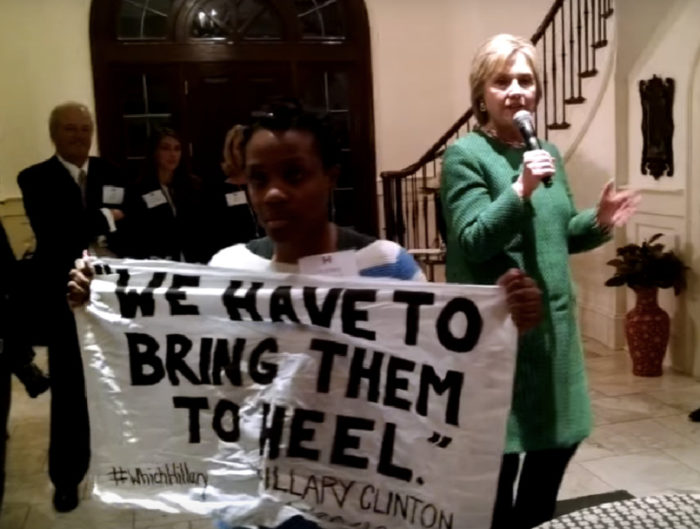 Well this is not surprising at all. The saddest thing here is that people who hold such illogical and overwrought opinions actually get to have a private meeting with a leading presidential candidate.

BLM Radicals are Soros funded. Hillary is Soros funded. Didn’t they get the memo that they are playing on the same team? Slavery is not America’s original sin, it was the sin of the Democrat party.

QUESTION: Right, and then because that language was not specific, it ultimately ended up benefiting white women.

HILLARY CLINTON: See I taught at the University of Arkansas Law School. And I taught a lot of black students who were admitted on affirmative action and who needed a lot of help. And I spent a lot of time helping them because they were smart, they were ambitious and they were poorly prepared.

But they were there and I worked as hard as I could to make sure they not only stayed there but they graduated. And they would not have been there but for affirmative action.

A transcript of a meeting Hillary Clinton held on October 9, 2015 with Black Lives Matter activists was including in the WikiLeaks release of John Podesta’s emails. It reveals a sometimes tense event during which Clinton said systemic racism is “the original sin of our founders.”

The October 2015 meeting was kept under wraps by the Clinton campaign, who withheld a list of attendees or quotes from the meeting. The day of the meeting Hillary tweeted out, “Racism is America’s original sin. To those I met with today, thank you for sharing your ideas.” This was in response to Aurielle Marie tweeting, “I want a president who will call racism ‘america’s cardinal sin’ IN PUBLIC. & not just a private meeting with young black radicals.”

The transcript of the meeting sent from Clinton staffer Varun Anand to various members on her campaign staff show that Hillary did indeed meet with “young black radicals.” More