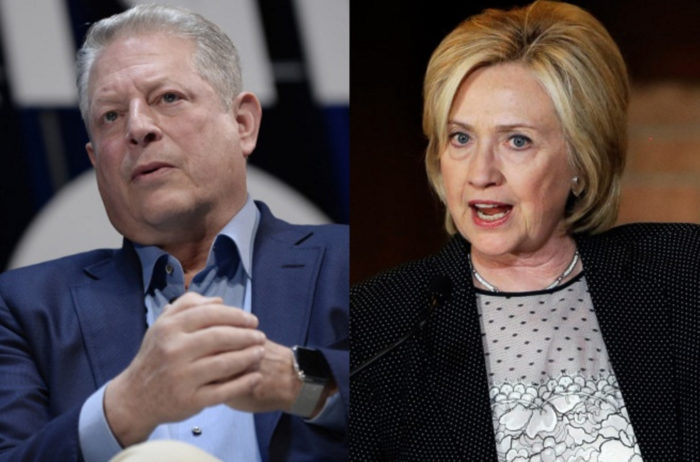 Oh how I love the smell of total desperation in the morning. Please do! It will only increase the speed of your decline! With the addition of Al Gore the entire world will see just how terrified you really are of having your butt kicked so you have to bring aboard this loudmouthed fool.

….While still optimistic that the race will turn decisively back in Mrs. Clinton’s favor after the debates, leading Democrats have been alarmed by the drift of young voters toward the third-party candidates.

The principal “super PAC” supporting Mrs. Clinton’s candidacy, Priorities USA Action, has concluded from its polling and other research that the reluctance to embrace the Democratic nominee among those who intensely dislike Mr. Trump is not going away and must be confronted.

“We’ll be launching a multimillion-dollar digital campaign that talks about what’s at stake and how a vote for a third-party candidate is a vote for Donald Trump, who is against everything these voters stand for,” said Justin Barasky, a strategist for Priorities USA.

Mrs. Clinton may also get an assist from one Democrat who has been largely quiet about the race, but can testify to the importance of resisting the third-party temptation: former Vice President Al Gore. Her staff has had conversations with aides to Mr. Gore about bringing him onto the campaign trail to emphasize the importance of supporting Mrs. Clinton if they want to make progress on combating climate change.

“I can assure you from personal experience that every vote counts,” Mr. Gore wrote in an email to The New York Times on Thursday, after a new CBS/New York Times poll showed Mrs. Clinton and Mr. Trump virtually tied. “The stakes are high for so many Americans. So I will vote for Hillary Clinton and I strongly encourage others to vote for her as well.”