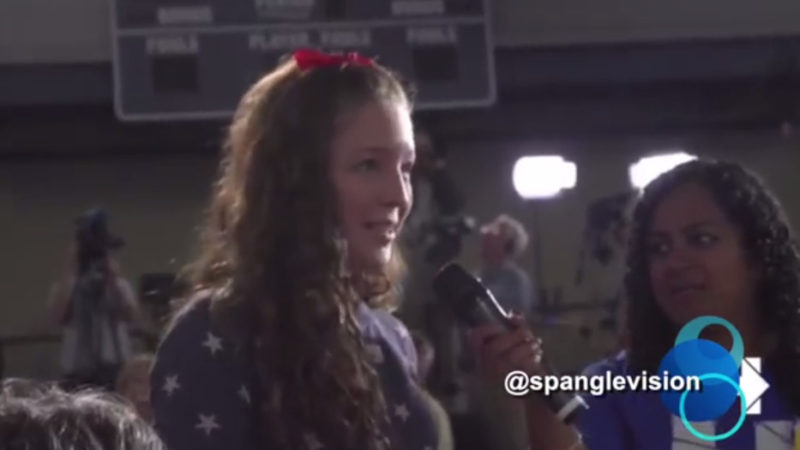 “Hillary’s Town Hall in Haverford PA Where She Stages Question with Child Actor”.

Wow, Hillary can’t do anything without cheating. Trump was absolutely correct, the only thing Clinton has to run on is the woman card.

Hillary  has no shame; she used a 15 year old child actor (Brennan Leach) to further her anti-Trump narrative. What kind of role model is Hillary for women teaching teenage girls that cheating is an acceptable form of winning?

Hillary Clinton and the democratic party are scam artists. Everything that comes from these people are disingenuous, staged and set up. There is no wonder so many people are leaving the Democratic party in record numbers. More

ZH: At a Hillary Clinton town hall yesterday in Haverford, Pennsylvania, a 15 year old girl was supposedly “chosen at random” to ask a question of the former Secretary of State.  But, the well-scripted performance raised some suspicion with a YouTuber named Spanglevision who decided to dig a little deeper.  And, wouldn’t you know it, the “random” participant was none other than child actor, Brennan Leach, whose father just happens to be Pennsylvania democratic State Senator Daylin Leach.  Oh, and in case it wasn’t obvious, Daylin supports Hillary for president…shocking.

So, here was the original question from Brennan:

“Hi Madam Secretary.  I’m Brennan and I’m 15 years old.  At my school, body image is a really big issue for girls my age.  I see with my own eyes the damage Donald Trump does when he talks about women and how they look.  As the first female president how would you undo some of that damage and help girls understand that they’re so much more than just what they look like?”

And here was Hillary’s attempt at knocking the soft ball out of the park…it’s almost like she knew the question was coming.

“I’m so proud of you for asking that question. You are right — my opponent has just taken this concern to a new level of difficulty and meanness.  And, it’s shocking when women are called names and judged solely on the basis of physical attributes.

“My opponent insulted Miss Universe. I mean, how do you get more acclaimed than that?  But, it wasn’t good enough. So we can’t take any of this seriously any more. We need to laugh at it. We need to refute it. We need to ignore it. And we need to stand up to it.” More