You would think the most qualified candidate in history would’ve figured out by now it was a bad idea to give middle America the one finger salute.

Once again the feminists that are the so-called “Champions of Women” are circling their wagons around another pervert simply because he is a democrat but I’m supposed to believe they really “care” about women?

Wow. How many ways is this ridiculous and hypocritical? First, he’s only saying all this now because he’s caught on camera. The others deny it occurred. It’s not ‘accountability’ for him now to be trying to reduce the fallout. And where is her husband or her being accountable for what he did and what she covered up? –WZ 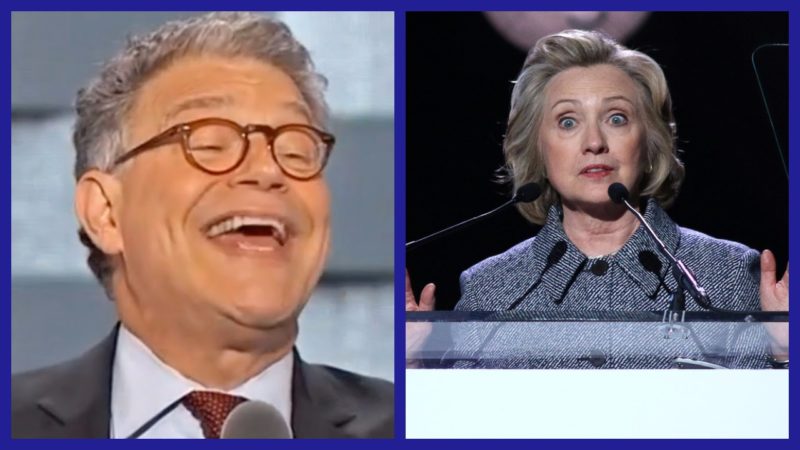 NY Post: Hillary Clinton came to Sen. Al Franken’s defense on Friday during an interview for her new book, saying he should be praised for his “accountability” and willingness to apologize.

Attention: If you choose to listen get a BARF BAG!

Speaking to WABC Radio’s Rita Cosby, the former Secretary of State instead pointed the finger at President Trump and embattled GOP Senate nominee Roy Moore — claiming they should be viewed as the real predators and not Franken.

“Look at the contrast between Al Franken, accepting responsibility, apologizing, and Roy Moore and Donald Trump who have done neither,” Clinton said.

“[That] is the kind of accountability I’m talking about. I don’t hear that from Roy Moore or Donald Trump.”

A former Playboy Playmate came forward this week and accused Franken, a Democrat from Minnesota, of groping her while the two were on a USO tour in 2006. The senator offered his “sincerest apologies” on Thursday, saying he was just trying to be funny.

Franken has inevitably drawn comparisons to Moore and Trump, both of whom have been accused of sexual misconduct. More