Everything about the Clinton’s is tainted… She has protected her disgusting serial women abuser husband and harassed his victims for decades! She has been a GENERAL in the ‘war on women.’

The fact that Hillary is well known as a women’s rights supporter shows just how corrupt the democrat party and the MSM that supports are really is. 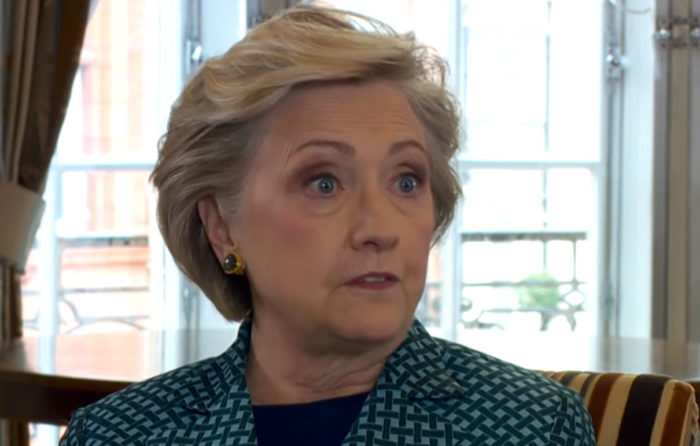 Hillary Clinton is not a feminist. Never was and never will be. If there was any doubt about Clinton’s lack of empathy towards young women, especially in the face of her thirst for power, a new report all but puts that to rest. According to the New York Times, Clinton protected a top advisor in 2008 from being fired after he was hit with multiple sexual harassment allegations. Read more at TGP.

This story should come as a shock to no one. Hillary Clinton’s biggest asset, after all, was her husband Bill, who was accused of rape and sexual assault by several women, and was impeached about lying to a Grand Jury about having sex under the Oval Office with an intern while married to Hillary and serving as the President of the United States.

Allegations of sexual harassment against Hillary Clinton’s spiritual advisor were roundly ignored by her 2008 presidential campaign. A bombshell New York Times report dropped on January 26 alleging inappropriate behavior by Burns Strider, 52, who had worked with Clinton since January 2007. In 2008, Strider was accused by a 30-year-old female staffer of rubbing “her shoulders inappropriately” and kissing “her on the forehead,” in addition to sending “a string of suggestive emails” with at least one of those coming late at night.

The staffer brought her complaints to campaign manager Patti Solis Doyle. The Times says Strider was kept on at Clinton’s request with Doyle advocating that he be fired. His punishment was to undergo counseling and to have his pay docked. The staffer was moved on to another position within the campaign.

The New York Times report goes on to say that Strider was re-recruited by the Clinton campaign in preparation for the 2016 election. At that time, Strider was working with a group named Correct the Record. The Times says Strider was fired “after several months” when he was accused of harassing a “young female aide.” The Washington Post reported in November 2013 that Strider was joining Correct the Record along with long-time Clinton ally David Brock. The Post said that among the group’s main priorities was to correct the narratives about Benghazi being put out by Republican candidates and media outlets. – Heavy

According to his LinkedIn page, Strider was a “Senior Adviser” and “Director of Faith Outreach” on Clinton’s 2008 failed Democratic primary campaign. Since 2009, Strider has been the president of the American Values Network. He writes that the organization, “seeks to be the salt of public and political discourse in America, preserving our values and heightening awareness of the key ingredients required for a prosperous society.” One of the organizations stated goals is “Tackling the most pressing moral issues of our time.”

Watch the accused pervert preaching to an audience about how to have a “happy community”:

New York Times: A senior adviser to Hillary Clinton’s 2008 presidential campaign who was accused of repeatedly sexually harassing a young subordinate was kept on the campaign at Mrs. Clinton’s request, according to four people familiar with what took place. Mrs. Clinton’s campaign manager at the time recommended that she fire the adviser, Burns Strider. But Mrs. Clinton did not. Instead, Mr. Strider was docked several weeks of pay and ordered to undergo counseling, and the young woman was moved to a new job. Mr. Strider, who was Mrs. Clinton’s faith adviser, a co-founder of the American Values Network, and sent the candidate scripture readings every morning for months during the campaign, was hired five years later to lead an independent group that supported Mrs. Clinton’s 2016 candidacy, Correct the Record, which was created by a close Clinton ally, David Brock. He was fired after several months for workplace issues, including allegations that he harassed a young female aide, according to three people close to Correct the Record’s management.

Breitbart News: Adams, who relocated to Colorado to work for the campaign as a paid organizer, said she was subject to homophobic remarks (Adams is bisexual) which went on to comments about her body and attempts to force her into one-on-one situations and get her to drink alcohol. Adams, then 19, said her harasser also encouraged her not to wear bras.

While her abuser was eventually fired months after Adams first complained to superiors in June, he was reportedly later rehired in October to work on the campaign for a different state party, leaving her disillusioned. […]

“You have a lot of young passionate people who want to help change the world through Democratic politics,” Adams said. “Older Democratic operatives see this passion and exploit it, putting us in an extremely stressful and unhealthy work environment.”

[…]Salsbury, who worked as a volunteer as president of American University Students for Bernie, told HuffPost a campaign intern made unwanted advances, but the campaign had no structure to deal with issues among volunteers.