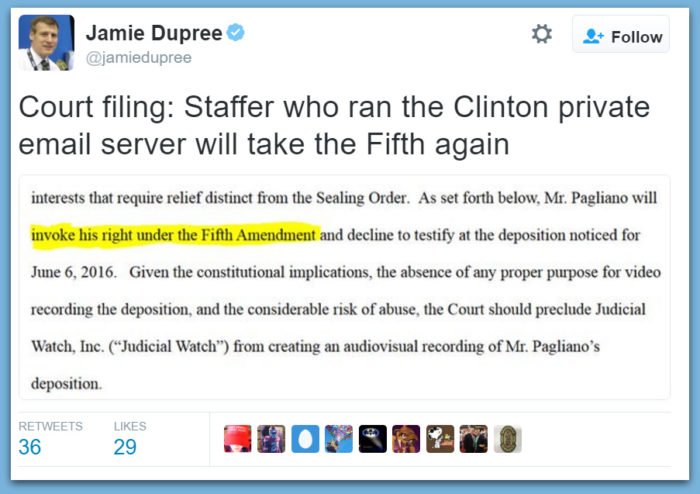 Is he is pleading the 5th, because he does not want to die in a freak car accident or something?

Pagliano’s Monday deposition is set in a lawsuit over public records brought by the conservative group Judicial Watch, regarding the operation of Clinton’s server and the employment status of one of her top aides. “Mr. Pagliano is a nonparty caught up in a lawsuit with an undisputed political agenda,” his lawyers said in a court filing, obtained by ABC News.

Judicial Watch asked that Pagliano’s deposition be recorded on video, to which Pagliano’s lawyers said there was no “proper purpose” –because he won’t answer questions anyway – and left Pagliano vulnerable to “considerable risk of abuse.” More

The Blaze: This isn’t the first time Pagliano has asserted his Fifth Amendment right against self-incrimination.

In September, he invoked his right after being called upon to testify before the House Select Committee on Benghazi, something which even one of Pagliano’s own attorneys acknowledged “may be controversial in the current political environment.”

One thing that is different for Pagliano this time around, however, is that unlike the last time he took the Fifth, he now has immunity from the Justice Department. Federal investigators cut the deal with Pagliano in March after he agreed to cooperate with them in the ongoing probe into the former top diplomat’s email practices. More