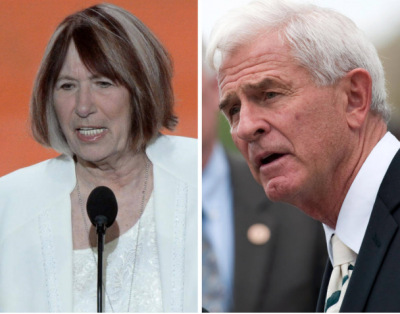 These parents are brave for going against Hillary. With the media seemingly backing Hillary, it will be hard to get a fair trial in this case.

The parents of two of the Americans killed by Islamic terrorists during the Sept. 11, 2012 Benghazi attacks are suing Hillary Clinton for defamation, negligence and wrongful death.

They are being represented by Larry Klayman, a well-known conservative activist who routinely sues federal government agencies and politicians.

Woods and Smith, both of whom have endorsed Donald Trump for president, have publicly claimed that at their sons’ memorial service at Joint Andrews Air Force Base on Sept. 14, 2012, Clinton blamed the maker of a YouTube video for the attacks. Clinton has denied ever making those statements.

“During the private meeting, Defendant Clinton lied to Plaintiffs and told Plaintiffs that the Benghazi Attack was the result of the anti-Muslim YouTube video that had been posted online and that the creator of the video would be arrested,” the suit reads.

It also notes something that Woods has said in various interviews — that he took notes of that conversation with Clinton shortly after it took place.
He wrote in his diary that “I gave Hillary a hug and shook her hand, and she said we are going to have the film maker arrested who was responsible for the death of my son.”

Clinton has publicly denied that those conversations took place.
The filing points to several interviews in which Clinton disputed Woods and Smith.

In a Dec. 6, 2015 with George Stephanopoulos, Clinton was asked if she told the Benghazi victims’ families that the attacks were sparked by the film.

“No. You know, look I understand the continuing grief at the loss that parents experienced with the loss of these four brave Americans,” she said. More