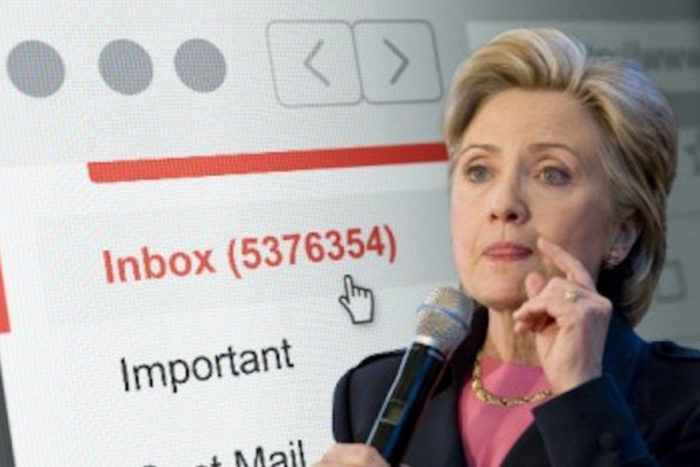 HRC is an evil, slimy, lying witch and if America is stupid enough to elect her, then we are truly going straight down the toilet bowl.

Here’s a seemingly innocuous email amongst the Wikileaks Podesta emails (the red is our obscuring the phone number of the sender ): 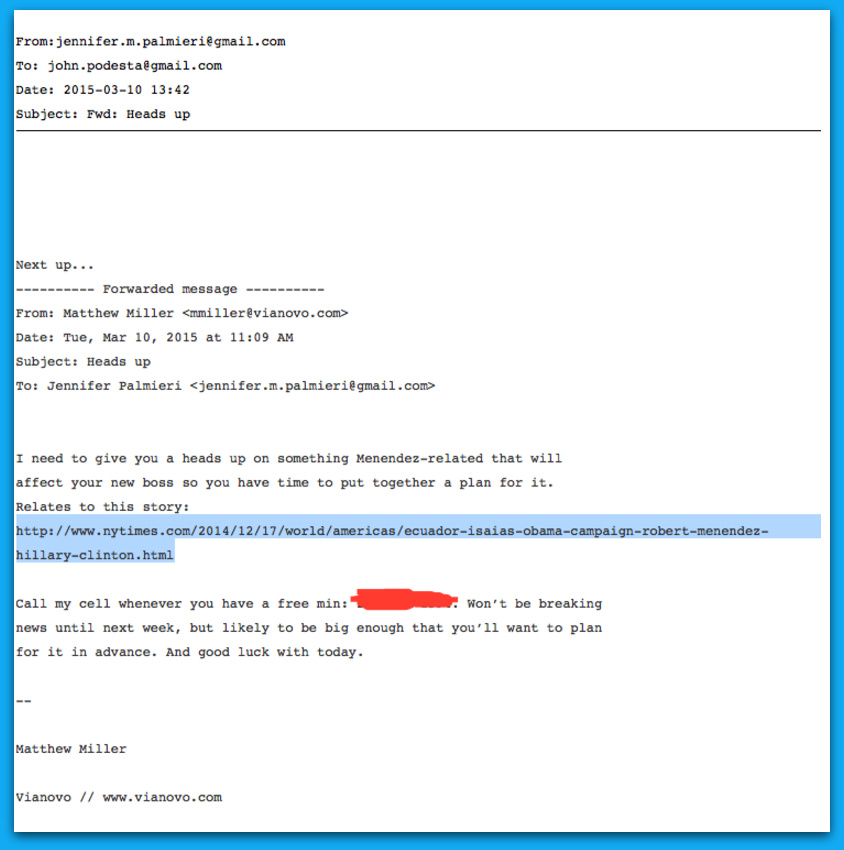 So who is this about and what is being said here?

Hence Hillary was the ‘new boss’ meant to get the ‘heads up’ and prepare for what news would be breaking in the next week for which she and Palmieri might want to prepare.

Miller says the news relates to the NY Times article linked. The article deals with a powerbroker Ecuadorean family, the Isaías family, and the Obama administration and Hillary Clinton being accused of helping an ‘alien smuggler’, allegedly for big donations to Democrats. The whole article is well-worth the read, but here are some of the highlights:

MIAMI — The Obama administration overturned a ban preventing a wealthy, politically connected Ecuadorean woman from entering the United States after her family gave tens of thousands of dollars to Democratic campaigns, according to finance records and government officials.

The woman, Estefanía Isaías, had been barred from coming to the United States after being caught fraudulently obtaining visas for her maids. But the ban was lifted at the request of the State Department under former Secretary of State Hillary Rodham Clinton so that Ms. Isaías could work for an Obama fund-raiser with close ties to the administration.

It was one of several favorable decisions the Obama administration made in recent years involving the Isaías family, which the government of Ecuador accuses of buying protection from Washington and living comfortably in Miami off the profits of a looted bank in Ecuador.

The family, which has been investigated by federal law enforcement agencies on suspicion of money laundering and immigration fraud, has made hundreds of thousands of dollars in contributions to American political campaigns in recent years. During that time, it has repeatedly received favorable treatment from the highest levels of the American government, including from New Jersey’s senior senator and the State Department. […]

“Alien smuggling” is what American consular officials in Ecuador called it.

American diplomats began enforcing the ban against Ms. Isaías, blocking her from coming to Miami for a job with a communications strategist who had raised up to $500,000 for President Obama.

What happened next illustrates the kind of access and influence available to people with vast amounts of money.

For more than a year, Senator Robert Menendez, Democrat of New Jersey, and his staff engaged in a relentless effort to help Ms. Isaías, urging senior government officials, including Mrs. Clinton’s chief of staff, Cheryl Mills, to waive the ban. The senator’s assistance came even though Ms. Isaías’s family, a major donor to him and other American politicians, does not live in his state.[…]

But the case involving Estefanía could prove awkward for Mrs. Clinton, who was in charge of the State Department at the time high-ranking officials overruled the agency’s ban on Ms. Isaías for immigration fraud, and whose office made calls on the matter […]
A spokesman for Mrs. Clinton and her chief of staff, Ms. Mills, denied any special treatment for Ms. Isaías. Although Ms. Mills is unlikely to serve in any official capacity on a potential 2016 presidential campaign, she would undoubtedly be a strong behind-the-scenes presence and one of a small number of longtime advisers whom Mrs. Clinton would rely on for advice.

Estefania Isaías had been banned from entering by diplomats because of her alleged involvement in ‘alien smuggling’. Sen. Robert Menendez and Hillary Clinton were responsible for lifting the ban on her.

Let’s go back to the Miller email from March 2015. The NY Times article was from December 2014. What was Miller warning Palmieri and Clinton was coming?

On April 1, 2015, Sen. Robert Menendez was indicted for pressure to approve foreign visas.

His interest in immigration issues also ended up being one of the actions cited in the indictment handed up against him, which cited his pressure on the State Department to approve visas for several “foreign girlfriends” of Salomon Melgen, the wealthy friend whom prosecutors say paid Mr. Menendez in gifts and campaign contributions. […]

The State Department said Wednesday it didn’t have a response to questions about the visas.

The email said this ‘head’s up’ “will affect your new boss [Hillary Clinton] so you have time to put together a plan for it […] Won’t be breaking news until next week, but likely big enough you’ll want to plan for in advance”.

So what was the information Matthew Miller, who had been Eric Holder’s spokesman and Director of the Office of Public Affairs, had, who did he get it from and did he pass it on, as the email would suggest, to Palmieri? Did he inform Palmieri of the coming indictment or surrounding information?

Leaking of an investigative action out of the DOJ giving a potential target the opportunity to prepare of plan would be highly improper and potentially illegal.

It also would be again indicative of the all-too-cozy relationship between DOJ, which is supposed to be non-partisan, and the Democrats and the Clinton campaign.