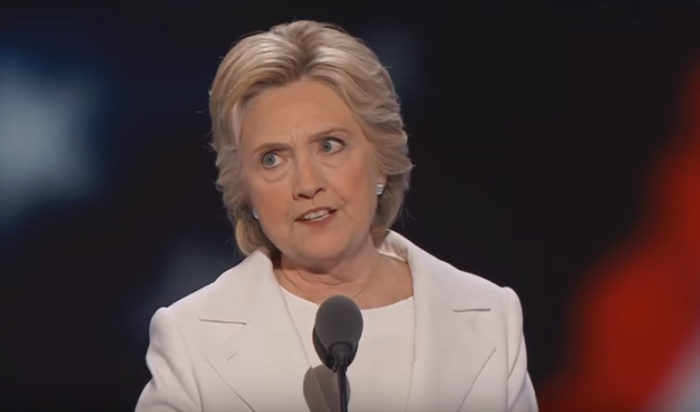 Of course it’s a lie coming from the queen liar bee. She wouldn’t know a truth if it stung her on the butt. It’s all song and a dance show. Truth doesn’t reside anywhere near Hillary.

Hillary told the crowd about how she helped that girl get to school.

“My mother, Dorothy, was abandoned by her parents as a young girl. She ended up on her own at 14, working as a housemaid. She was saved by the kindness of others.

Her first-grade teacher saw she had nothing to eat at lunch and brought extra food to share the entire year. The lesson she passed on to me, years later, stuck with me: No one gets through life alone. We have to look out for each other and lift each other up.

And she made sure I learned the words from our Methodist faith: “Do all the good you can, for all the people you can, in all the ways you can, as long as ever you can.”

“So, I went to work for the Children’s Defense Fund, going door-to-door in New Bedford, Mass., on behalf of children with disabilities who were denied the chance to go to school.

I remember meeting a young girl in a wheelchair on the small back porch of her house. She told me how badly she wanted to go to school — it just didn’t seem possible in those days. And I couldn’t stop thinking of my mother and what she’d gone through as a child.

It became clear to me that simply caring is not enough. To drive real progress, you have to change both hearts and laws. You need both understanding and action.

So we gathered facts. We built a coalition. And our work helped convince Congress to ensure access to education for all students with disabilities.”

But it was ALL A LIE.

Here’s what I learned; The Mayor of New Bedford in 1973 was a guy I happen to know, Mayor John Markey (81 years old and a lifelong Democrat now living in Dartmouth, MA. Mayor Markey is also a retired judge and a man whose credibility and character are beyond reproach. “Jack” as he is known, is eligible for both court and municipal pension but only accepts one. He is not one to “double dip”. I called Jack and asked him a few questions about handicap services in 1973 at the New Bedford Public Schools, including wheelchair accessibility.

“I took over as Mayor in January of 1973. We had a budget for vans with drivers and provided services to students with disabilities. It was Tremblay Bus. They would pick them up and drop them off at their homes. Now, they may not have been able to go to the local school, depending on whether or not the schools were accessible for wheelchairs but there were many schools then which could and did accommodate our handicapped students in wheelchairs”.

“In fact, we had a local guy who was a paraplegic, injured in a diving accident who came to my office many times to advocate for the disabled and I actually spent an entire day in 1973 in a wheelchair to better understand the challenges they face everyday. Soon after that we were cutting out sidewalks for wheelchairs and doing things in New Bedford before the laws ever compelled us to.”

So despite the progressive and good works of the New Bedford leadership in 1973 to make the city schools and streets more handicap accessible, Hillary (no pun intended) rolled New Bedford local government under the bus last night in front of the world. And needed to lie to do it. It just didn’t seem possible in those days Hillary, because it wasn’t true in 1973 New Bedford.

Hillary Clinton made up the whole story to sound like a selfless humanitarian.
In 1973 New Bedford was already giving handicapped kids rides to school.

Years later Hillary lied about handicapped accessibility in the town to sound more charitable and loving to the American public.

It was all a lie.