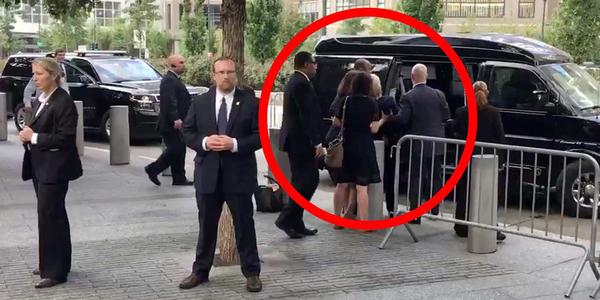 I protected First Lady Hillary Clinton, President Bill Clinton, and their family while I served in the Secret Service Uniform Division as an officer from 1991-2003.

By now, you have most likely seen the startling video of Hillary Clinton ‘fainting.’ Through the lens of my 29-year-career in The Service, I can see what a naked-eyed media pundit cannot: There is something seriously wrong with Mrs. Clinton.

Pneumonia or overheating are highly suspect excuses and I’ll explain why.

My analysis is not partisan. I cared for and protected the Clintons for many years. It was my duty to guard Mrs. Clinton in the Secret Service and I was so close to the First Family that the Supreme Court subpoenaed me to testify on the details of Bill Clinton’s late-term scandals.

These are the facts.

Watch Clinton’s Secret Service’s detail in the video. Their behavior is extremely professional and very telling. Each agent is to be commended.

At the beginning of the video, Hillary is with a protective detail of Secret Service agents, as well as two female staffers. One staffer stands very close at her back and another is shoulder-to-shoulder and arm-in-arm with Mrs. Clinton to give her balance and prop her up.

Mrs. Clinton leans against a “ballard,” the metal columns we use to stop incoming 5-ton vehicles, and “bicycle racks” (our nickname for the portable metal fences) to restrict pedestrian access to an area.

As the van pulls up, she has a rigid wavering posture. She awkwardly leans on the ballard and stares straight ahead with her neck craned and extended up as her body is supported at the side and rear by her staffers.

One agent gets the door, but no one moves to enter. The Secret Service doesn’t like to wait—standing still in the eyes of the Service is waiting for an attack to happen. But the staffer can’t move Mrs. Clinton. Anything that holds up a motorcade is extremely dangerous and anything that ties up a Secret Service agent’s hands from drawing their pistol or intervening a threat is a hazard.

The female agent at the front of the van is scanning. She sees Mrs. Clinton odd behavior as well. The female agent begins backing up to the entrance of the van to shield both sight and anyone approaching—as is procedure. She keys her mic signaling that the van is about to move. The agent is to be commended for maintaining her blank expression. More