Incompetence on a massive scale even for the government… The errors were discovered and published by HUD’s independent inspector general.

Sadly, all of the Obama regime’s corruption is still lingering. Looks like Chicago style accounting and now we need a team of forensic accountants and a prosecutor to clean up the mess.

TGP: Obama’s HUD Received One of the Worst Audit Results in US History! 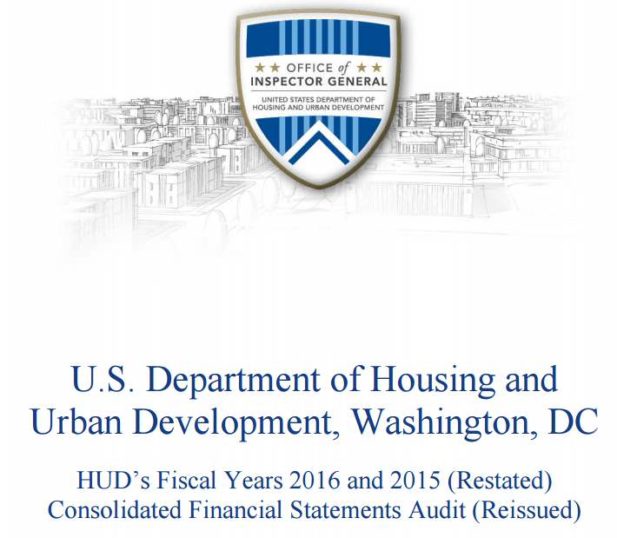 HUD reissued its fiscal years 2016 and 2015 (restated) consolidated financial statements due to pervasive material errors that we identified.

The total amounts of errors corrected in HUD’s notes and consolidated financial statements were $516.4 billion and $3.4 billion, respectively. There were several other unresolved audit matters, which restricted our ability to obtain sufficient, appropriate evidence to express an opinion. These unresolved audit matters relate to (1) the Office of General Counsel’s refusal to sign the management representation letter, (2) HUD’s improper use of cumulative and first-in, first-out budgetary accounting methods of disbursing community planning and development program funds, (3) the $4.2 billion in nonpooled loan assets from Ginnie Mae’s stand-alone financial statements that we could not audit due to inadequate support, (4) the improper accounting for certain HUD assets and liabilities, and (5) material differences between HUD’s subledger and general ledger accounts. This audit report contains 11 material weaknesses, 7 significant deficiencies, and 5 instances of noncompliance with applicable laws and regulations.

These results are shocking.  If a US corporation had similar results their stockholders would flee, the stock price would quickly plummet and the company would quickly go bankrupt within days!

Thank God the Obama years are over!

More Hillary Russian Collusion? Check Out What Hillary Did With 10 Russian Spies