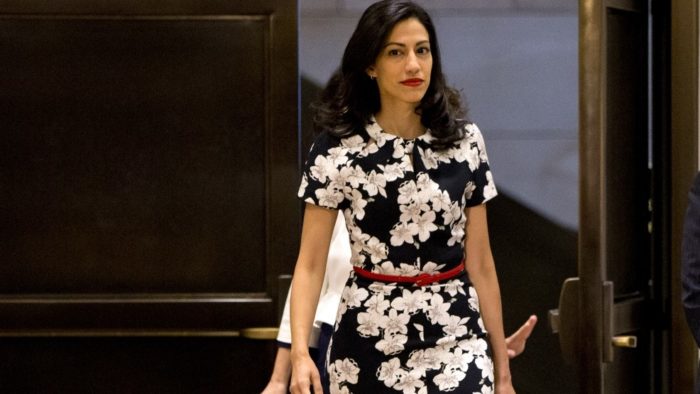 Why isn’t Huma and Hillary in big trouble for these emails? If it were anyone else they would have been thrown in jail already.

A new batch of recently released Hillary Clinton emails show the former executive of the Clinton Foundation sought a diplomatic passport for himself and associates from then-Secretary of State Hillary Clinton’s State Department, according to conservative watch dog group Judicial Watch.

The request was met with the response “Ok will figure it out,” from Clinton’s top aide Huma Abedin. It is unclear what action, if any, she then took.

Diplomatic passports can only be issued to members of the foreign service, their family members or American citizens working on U.S. contracts, per the U.S. Code of Federal Regulations.

Clinton’s press secretary Angel Urena rebuffed the report saying, “once again Judicial Watch is not telling you the whole story.”

In a statement, Urena said:

“The trip led to the successful release of two American journalists who were being held in North Korea. This request turned out to be unnecessary and the trip was able to occur without diplomatic passports.”

If the passports were obtained, the revelations could bolster Clinton’s opponents’ position that the current Democratic nominee for president used her time as Secretary of State and her family’s foundation to foster a murky “pay to play” system in which rich donors were often gifted high-level favors.

The email was sent on July 27, 2009 from then-Clinton Foundation executive Doug Band saying, “Need get me/ justy and jd dip passports.”

“We had them years ago but they lapsed and we didn’t bother getting them,” Band wrote to Abedin.

The report released by Judicial Watch did not reveal why Band needed the passports or if they were even approved by the State Department at the time.

The email was one among 510 pages of State Department documents released by Judicial Watch Thursday.