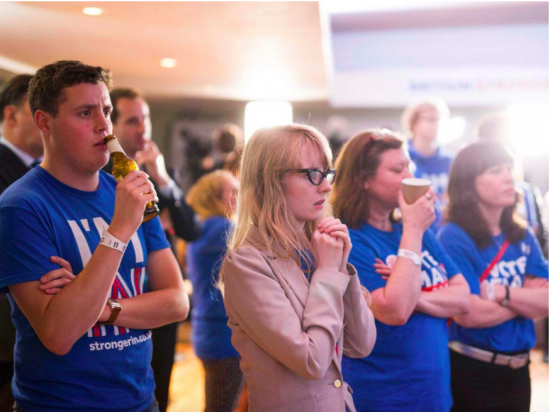 This is what happens when parents let their kids get their way when they whine and throw fits… They grow up to think they can do the same as adults… Too bad the Brexit decision has already been made and them throwing a fit about won’t change anything..

Hundreds of people have said that they will march on parliament in protest at the decision to leave the EU.

The organisers of an event due to take place at the Houses of Parliament on Saturday hope that the event can serve as a way of registering people’s anger about “a campaign and a result that has divided the country”.

“This referendum’s campaign descended into an absolute pantomime, and the result is terrifying,” the organisers write on Facebook, encouraging people to arrive at Parliament Square at noon.

They point out that many people didn’t understand the full implications of the vote and that the campaign wasn’t run to give them all the information that they need.

The organisers of one of the events – known as “F*** BREXIT RALLY” – said that they were hoping that it would serve more as a forum for people to air their views than a traditional protest.

“Tomorrow lets take to the streets at the Houses of Parliament to peacefully come together and show strength in the face of a decision none of us can truly predict the outcome of.”

Britain voted to leave the European Union in a historic referendum on Thursday. But it was only by the slimmest of margins and many regions, including most of London, voted convincingly to remain in the EU.

Anger has already boiled up in the wake of a campaign that many have criticised as overly aggressive and violent, in particular in the wake of the killing of Jo Cox. As Boris Johnson left his house on the morning of the results, his house and then car was surrounded by people on bikes who attempted to block his vehicle from moving and shouted slurs.

The organisers of the Parliament Square event have stressed that people should avoid violence because it could further exacerbate tensions throughout Britain. More