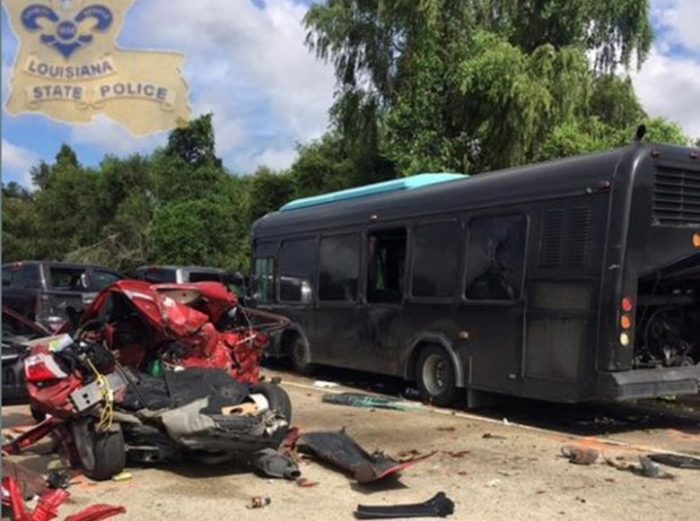 What a tragic accident for this community. Why was this unlicensed illegal alien driving this bus full of volunteers in the first place?

A bus with an unlicensed driver spun out of control near New Orleans on Sunday, killing two people and injuring 41, while taking volunteers to help with Louisiana flood relief, officials said.

St. John the Baptist Fire District Chief Spencer Chauvin was among those killed in the early morning crash after the chartered bus slammed into him as he tried to help victims of another accident, Louisiana State Police spokeswoman Melissa Matey told reporters at a news conference.

Two other firefighters were injured in the crash, one critically, and a passenger in another vehicle struck by the bus died at the scene, the spokeswoman said.

The driver, who was unauthorized to drive a commercial vehicle, was in custody and would be booked on suspicion of negligent homicide, reckless driving and driving without a license, Matey said.

“All three firemen were thrown over the guard rail and into the water below,” Matey said.

The incident started when a speeding pickup truck spun out of control, bouncing from one side of the road to the other before coming to rest along the right lane and shoulder of Interstate 10 near the community of Laplace, about 25 miles (40 km) northwest of New Orleans, Matey said.

The firefighters and state police troopers were on scene to investigate when the bus, also out of control, slammed into the fire truck and a Toyota Camry, Matey said. Jermaine Starr, a passenger in the Camry, was pronounced dead at the scene.

It was not immediately clear why the bus driver, Denis Yasmir Amaya Rodriguez, 37, lost control.

Rodriguez, who is from Honduras, was in the United States illegally and Homeland Security officials are assisting the state in its investigation, Matey said. More