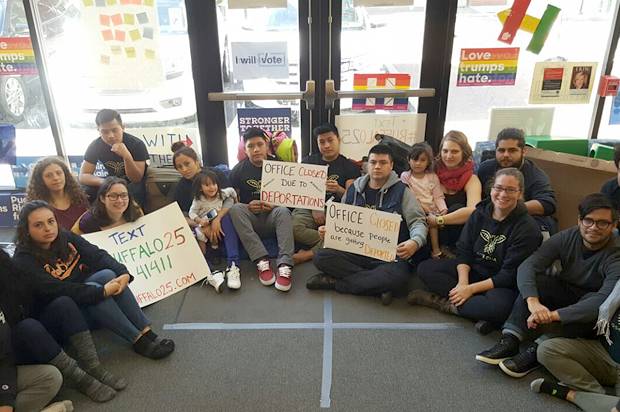 These illegal aliens took over Hillary’s office and shut it down for 2 days. Hillary wants open borders anyways, surely she agrees with them.

A group of 20 migrant justice activists occupied Hillary Clinton’s campaign office in Pittsburgh on Thursday night, demanding that the Democratic presidential nominee call for an end to record-breaking deportations and raids.

The activists, who call themselves #Buffalo25, brought sleeping bags and spent the night in the office. A spokesperson told Salon on Friday morning that they are still occupying the office.

#Buffalo25 is a campaign created by the immigrant rights group Movimiento Cosecha in order to bring national attention to recent ICE raids in Buffalo, New York.

Thais Marques, a volunteer organizer for Movimiento Cosecha, said that several activists came into the Clinton campaign office around 5 p.m. on Thursday, posing as volunteers. An hour later, more activists from the Cosecha Movement came in with five of the workers who were affected by the Buffalo raids, including four who are forced to wear ankle bracelet monitors.

“We sat in front of the doors and started singing,” Marques said. “Then some of the Buffalo 25 began sharing their stories — what happened during the raid, how it is affecting their families and what we are asking of the Clinton campaign.”

The activists posted a live-stream video of their occupation.

The regional staff of the Clinton campaign remained in the office, Marques told Salon. They shut down the office on Thursday night and all day on Friday.

“They would rather close down their office than have people listen to the pain of the Buffalo25,” Marques said.

Likewise, activist Maria Cabello argued that Hillary Clinton “would rather close her campaign office than protect the undocumented workers of New York.”

Salon reached out to the Clinton campaign for comment, but did not receive a response.

In late October, federal agents raided four popular Mexican restaurants in Buffalo, New York, arresting 25 employees. At least seven now face deportation. This was one of the largest workplace raids that has taken place under the Obama administration. The Obama administration has deported nearly 3 million migrants and refugees, more than any other president. More