Less than a year for robbing two banks? Oh, that’s right ‘black privilege.’ A white man would have gotten 20 years. And now two doctors with decades of training and experience are lost to society. Way to go Judge Lisa Grant!

Why was he still in this country after serving time for two bank robberies? 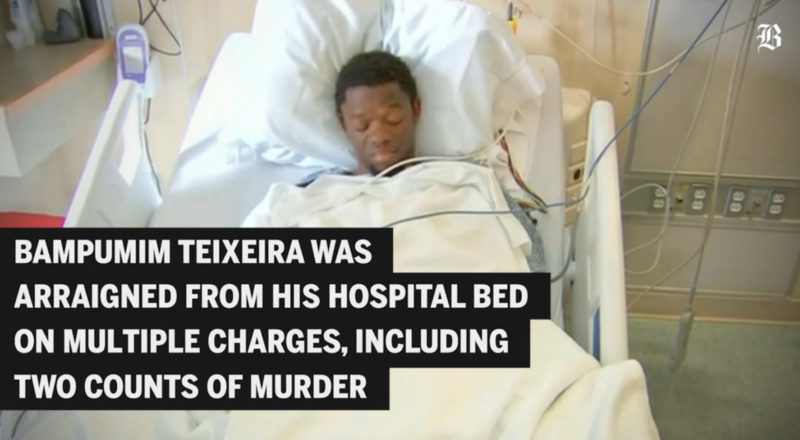 TGP: Boston, MA – Bampumim Teixeira was arraigned from his hospital bed on multiple charges, including two counts of murder. Teixeira, who is an immigrant from Africa murdered two doctors in cold blood.

Teixeira has a criminal history as well. He received a light sentence by a liberal judge for 2 bank robberies.

The Boston Globe: Boston police discovered a black backpack full of jewelry when they searched the penthouse condo where two doctors were slain Friday, a killing that authorities allege was committed by a man who once worked for a security firm at the South Boston complex.

The suspect, 30-year-old Bampumim Teixeira, was shot and wounded by police inside the 11th-floor condo at 141 Dorchester Ave., where he allegedly murdered the doctors, Lina Bolaños, 38, and Richard Field, 49.

On Friday night, Pappas said, a friend of both Field and Bolanos received a text message from the doctors shortly before 8 p.m. that “requesting that the police be notified, that there was a serious situation and that there was a gunman in the apartment belonging to Dr. Richard Fields.

He said that when officers reached the 11th floor outside Field’s condo, they found a set of keys on the floor outside the unit. They shouted into the unit, got no response, and then used the keys to open the door, entering into the apartment, where all the lights were off, Pappas said.

Inside, an officer encountered a man in dark clothing. “In the ensuing moments, there was an exchange of gunfire,” Pappas said. ’

He said the man in black clothing was Teixeira, who was taken into custody by officers outside the apartment. Teixeira had been shot in his abdomen, leg and left hand. Police also noticed Teixeira was wearing “dark-colored gloves,’’ Pappas said.

He did not disclose the cause of death, but the Globe has reported their throats had been slit. They were pronounced dead at the scene, Pappas said.

Teixeira had a criminal record. He had pleaded guilty in Boston Municipal Court to robbing the Summer Street branch of Citizens Bank in downtown Boston in 2014 and 2016 and was ordered to serve nine months in the Suffolk County House of Correction. He concluded his sentence last month.

According to immigration law, immigrants in the state can be deported if they are sentenced to at least one year or 365 days.

TGP received a tip: A sanctuary city, pro-immigrant, liberal judge, Lisa Grant (Deval Patrick appointee) gave Teixeira a 364 day sentence so he wouldn’t be deported. Had the judge given him the appropriate sentence it is extremely likely both doctors would still be alive. More