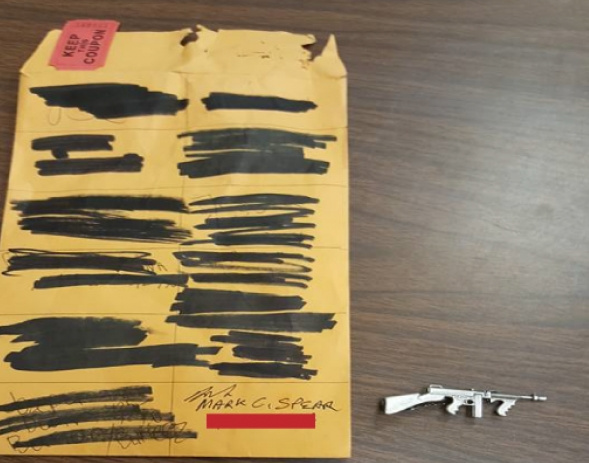 Zero tolerance huh? I have zero tolerance for this kind of stupidity. Tie clasps don’t kill people, sick people do. Is this a violation of his 1st Amendment rights?

The Daily Caller: In the latest incident of anti-gun hysteria to erupt in America, a security guard stopped a man attempting to attend a court board meeting in Tucson, Ariz. and forced him to remove a machine gun-shaped tie clasp from his necktie for the duration of the meeting.

The incident happened on Tuesday at the threshold of a meeting of the Pima County Board of Supervisors, reports the Arizona Daily Independent.

The man with the dangerous tie clasp was Mark Spear, a semi-legendary local libertarian who calls himself “the “Man in Black.” He is locally famous as one of the organizers behind a successful 2015 ballot initiative to ban the use of speed cameras in Tucson.

The very small, metal, pewter tie clasp Spear chose to wear on Tuesday night is shaped like a 1921 Thompson submachine gun. It is a little over two inches long.

“If the tie clasp could hold bullets, they would have to be .0045 caliber,” Spear told Tucson talk radio host James T. Harris on Thursday.

“Of course we have to go through the metal detector so I have to take out my keys, my change and metal sunglasses container and put it all into a little plastic bag,” Spear explained.

He also removed the tie clasp, “a thing you put on your tie to fasten to your shirt.” More