David Binkle is a chef and one of the architects behind Michelle’s nasty inedible lunches was recently arrested for defrauding the school lunch program and is now facing up to 13 years in prison.

Do the Obamas have any friends who aren’t criminals?

L.A. Times reports: David Binkle was hailed as a pioneer among school nutrition advocates for accomplishing a near-herculean task – using produce and meats provided by local growers to greatly reduce the number of fatty meals served in the nation’s second-largest school district. 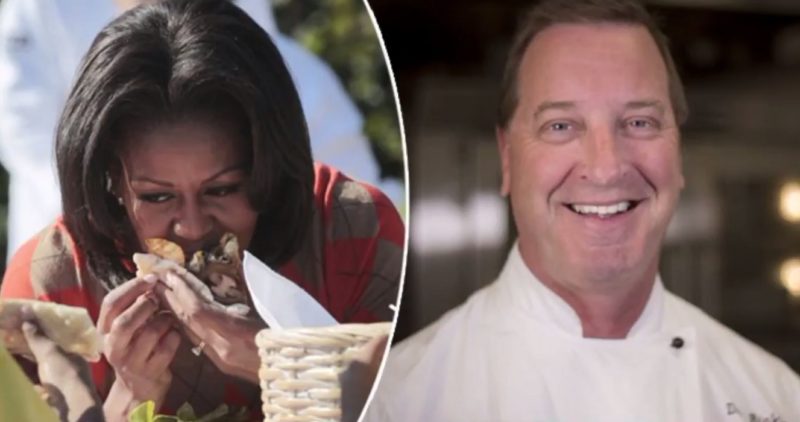 The 55-year-old appeared in court on Tuesday and pleaded not guilty to 15 felony counts including embezzlement and misappropriation of public funds. He posted $220,000 bail and is scheduled to return to court in October.

“While recognizing that everyone is innocent until proven guilty, the charges against Mr. Binkle are extremely upsetting as they do not reflect the professionalism, ethics and character we expect of all L.A. Unified employees,” the school district said in a statement.

According to court documents, Binkle repeatedly misappropriated district funds in amounts ranging from $5,000 to $15,000 between 2010 and 2014. Prosecutors also allege that he forged an application to become a vendor with the district and failed to disclose outside financial interests.

If convicted, he faces up to 13 years in prison.

Do the Obamas have any friends who aren’t criminals?https://t.co/kVzTOglOx0

General Mattis Issues Fiery Warning To N. Korea… Stand Down Or Face “End Of Its Regime..."

Obama Regime Knew About North Korea’s Miniaturized Nukes In 2013... But Downplayed The Seriousness