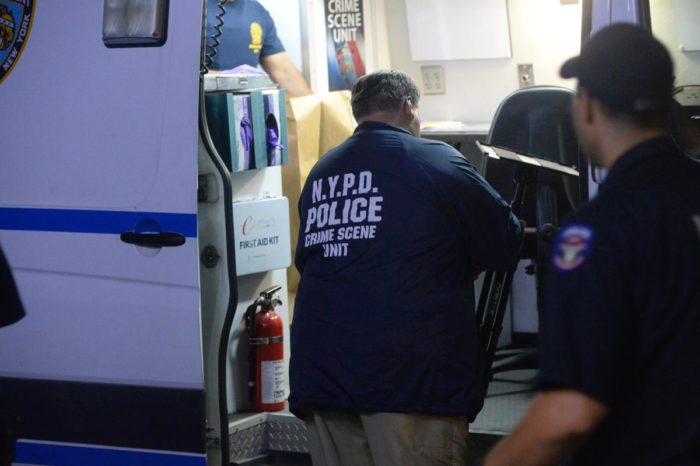 These random shootings need to be stopped. These thugs need to learn the can’t just open fire on anyone. The cops are on high alert after being targeted because of the hate the media and BLM has put out there.

Gunfire in Brooklyn on Tuesday was not aimed at police, in spite of initial fears, investigators have determined.

Shots were fired from a black Nissan sedan. Cops initially thought the target was officers patrolling on E. 23rd St. near Flatbush and Ditmas Aves. in Flatbush at about 10:40 p.m. But surveillance video later showed the gunfire was aimed at a group of young people up the block.

Someone inside the car fired one shot. As the vehicle drove off, an occupant fired off a parting shot, cops said. Nobody was hit.

What was thought to be a bullet hole near where the cops were standing turned out to be a previously drilled hole, likely for a cable television wire.

The NYPD initially requested the MTA shut down city bridges while cops searched for the car, officials said. Though the bridges remained open, officers there were on the lookout for the Nissan, MTA officials said.

The gunshots prompted Ed Mullins, president of the Sergeants Benevolent Association, to issue a warning on the union’s Facebook page.

“Please remain alert at all times. The SBA will utilize every resource to defend your action,” he wrote.

Four men in the car were being sought late Wednesday.

The shooting comes two days after a cop-hating maniac killed three cops in Baton Rouge, as perverse revenge for the police shootings of Alton Sterling, also in Baton Rouge, and Philando Castile in Falcon Heights, Minn. A sniper attack in Dallas that left five police officers dead on July 7.

In December 2014, NYPD Officers Rafael Ramos and Wenjian Liu were ambushed by an unhinged career criminal as they sat in their marked patrol car in Brooklyn. Ten months later, a career criminal gunned down Detective Randolph Holder in East Harlem.