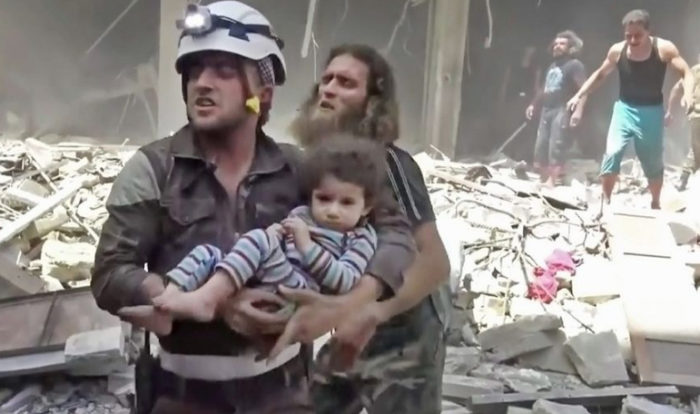 These atrocities are being funded by the billions of dollars that Obama and Kerry gave to the Iranians via the nuke agreement.

Iran’s brutal Islamic Revolutionary Guard Corps Quds Force has played an extensive role in the rape of Aleppo, building a network of bases around the Syrian city and directing militiamen from Lebanon, Iraq and Afghanistan to do the killing, an Iranian opposition group says in a new intelligence report.

“The fact is that Aleppo has been occupied by the IRGC and its mercenaries,” says the People’s Mujahedeen of Iran, or MEK, the largest opposition group to the Islamic mullahs who rule Iran. “Mass executions, preventing the transfer of the civilians, including women and children, [and]attacking the civilians has all been done by the forces of the mullahs’ regime.”

The MEK says in its report provided to The Washington Times that the Corps has amassed an army of 25,000 Iranian and militia troops in and around the burned and cratered Aleppo. These include homegrown Syrian mercenaries who receive cash transferred from Tehran to Damascus.

Maryam Rajavi, president-elect of the National Council of Resistance of Iran, which includes MEK, said Tehran’s actions show a “complicity in the most atrocious war crimes and crimes against humanity in the 21st century.”

The U.N. puts the overall death toll in Syria’s civil war at 400,000. More than 30,000 have died in the Battle of Aleppo, a last urban rebel holdout against President Bashar Assad’s regime.

“The blood for these atrocities are on their hands,” President Obama said last week of Iran, Russia and the Syrian regime.

For more than a decade, the MEK has established a good track record of accurately reporting misdeeds by Tehran, including its attempts to hide nuclear weapons-related facilities from U.N. inspectors.

In this case, the MEK has relied on its spying network inside the IRGC and the regime to cobble together a picture of Iran’s deep military involvement in keeping Mr. Assad in power.

With its growing military presence in Syria and Iraq via militias, plus its influence among Hezbollah militants in Lebanon and Houthi fighters in Yemen, Iran is on a path to expand its goal of hegemony over the Middle East.

The Institute for the Study of War, a nonprofit research group in Washington, has reported that Iran organized thousands of Shiite militias in Iraq not only to fight the Sunni Muslim Islamic State there, but also to deploy them to fight rebels in Aleppo.

The Times recently interviewed Iranian dissidents who had escaped to Western Europe. They said Iran’s brutality at home and aboard has increased, not decreased, since  the landmark nuclear deal with the U.S. that provided Tehran billions of dollars. More