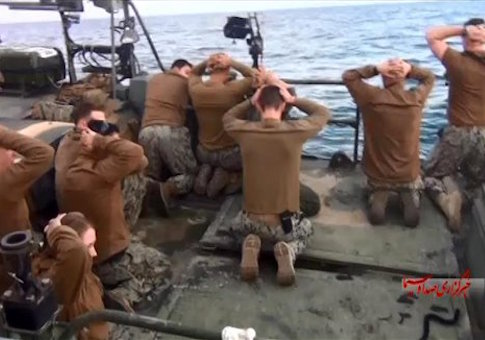 But didn’t the Obama administration thank Iran and claim they helped the American sailors? The sailors must feel betrayed by their own president after what they went through.

Iran used “intimidation tactics” when interrogating the 10 American sailors arrested in the Persian Gulf in January, according to a Navy investigation into the incident.

Details surrounding the incident, which has fueled efforts by Iran to embarrass the United States, have been sparse since U.S. Central Command released a preliminary timeline of the event days after the arrests. The newly released findings cast light on the events leading up to the sailors’ detention, as well as their treatment and interrogation while in Iranian custody.

“Interrogators employed intimidation tactics such as slapping the table, spinning the captive’s chair, or threatening to move them to the Iranian mainland; no crewmember was harmed,” the findings state.

Iranian personnel demanded to know what the U.S. boats were doing wading into Iranian territorial waters, where they came from, and “where their ‘mothership’ was.” The Iranians interrogated the crewmembers as a group and later individually interrogated seven of the 10 Americans in a separate room. The sole female crewmember’s interrogation was also recorded.

The Iranians asked questions about U.S. forces and also collected passwords to the sailors’ personal phones and laptops during their overnight detention.

“Crewmembers response strategies and actual answers varied; some were honest while others lied or played dumb,” the findings state.

Some crewmembers provided information such as their name, rank, and serial number when asked.

The Iranians gave food to the American crewmembers and attempted to film them when they began to eat.

While investigators found the American personnel to have been “derelict” in their duties and faulted multiple commanders for lack of leadership, they also concluded that Iran violated the sailors’ right of innocent passage under international law by arresting them at gunpoint. More