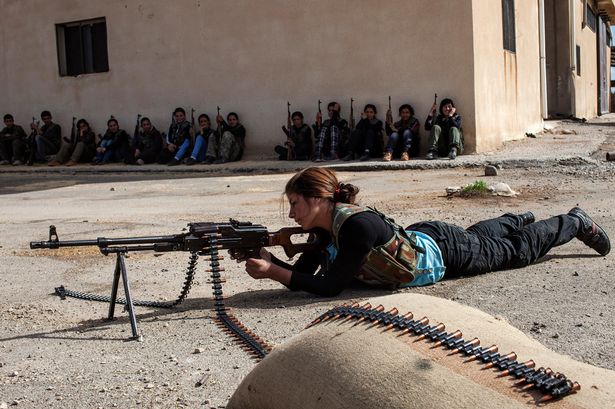 Sounds like the ISIS Commander got what he deserved. Good thing this woman was brave enough to shoot and kill the man who was holding her as a sex slave.

An Iraqi woman gunned down the ISIS terror chief who forced her into sex slavery, it has been reported.

The woman, believed to be a member of the Yazidi-Kurdish minority, shot dead a senior Islamic State commander known as Abu Anas, according to Iraqi satellite TV network Alsumaria News.

Kurdistan Democratic Party spokesman Saeed Mamouzini said that the militant was killed on Saturday near the city of Mosul in Iraq.

He forced the woman into sex slavery and handed her to his depraved followers as a sick ‘gift’, he said.

The Yazidis are a religious minority in Syria and Iraq and are oppressed and terrorised by the terror group – a total of 5,270 Yazidis were abducted last year, and more than 3,000 are still in their grip, according to figures within the community.

ISIS claim that rape is part of their twisted interpretation of Islam, according to the testimony of children they have abducted and forced into sexual slavery.

A 12-year-old girl who escaped the group told the New York Times that the man who abused her explained to her that the sickening act he was about to commit was not a sin because she was not Muslim.

In fact, he claimed her faith not only gave him the right to rape her – but encouraged it.

After tying her up and gagging her, he knelt beside the bed and prayed. Afterwards, he prayed again.

The girl, who was interviewed in a refugee camp, said: “I kept telling him it hurts – please stop.

“He told me that according to Islam he is allowed to rape an unbeliever. He said that by raping me, he is drawing closer to God.”

Muslims throughout the world have condemned ISIS for using the Islamic faith to justify their sickening acts. More