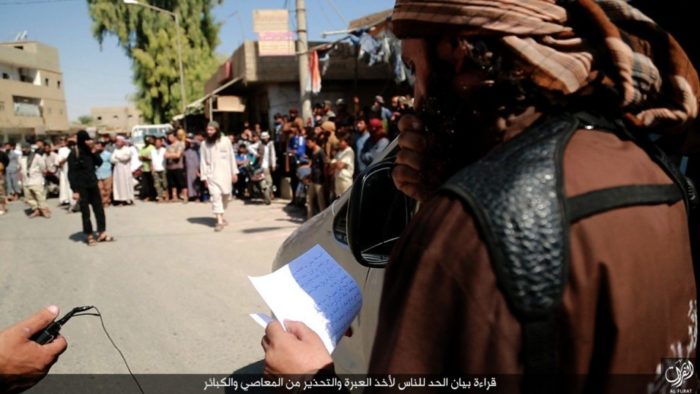 But Islam is the religion of peace right? What did these men do to that they deserved to be stoned to death?

In a new photo report released on Islamic State terrorist channels, ISIS religious police called “hisbah” carry out sharia law punishments, including public executions by stoning. The photo report was released on ISIS terrorist channels on October 11 from “Wilayat al-Furat,” or “The State of the Euphrates,” an Islamic State-occupied region of Syria.

The men punished in the photo report were punished by the hisbah. Hisbah is short for “Rijaal al-hisbah” and translates to “men who guard against infringements.” “Infringements” in this context refers to anything seen as non-Islamic by sharia law interpretation. Above, the hisbah are seen standing in the center of a crowd.

Above, a crowd gathers to watch the public punishments. According to sharia law, punishments must be carried out in public to dissuade people from doing the same “illegal” thing in the future. Many times in the Islamic State, people are forced to watch the brutality.

According to the Learn to Read the Quran, hisbah police duties includes the monitoring and punishment of: “1- Free mixing of the sexes and wanton display of beauty (tabarruj) which are forbidden according [to sharia.]2- Imitation of either of the sexes by the other. 3- Men making approaches to women either verbally or by their actions. 4- Profane, obscene or indecent speech. 5- Playing radios, TVs or recorders etc. near mosques or in such a way as to disturb the worshippers. 6- Non-Muslims openly manifesting their beliefs or the symbols of their religion, or showing disrespect towards the symbols and rulings of Islam. 7- Displaying or selling pictures, books or video or audio recordings which go against Islamic etiquette or Islamic beliefs. 8- Displaying 3-D or promiscuous images, or the symbols of non-Islamic religions such as the cross, the star of David, images of the Buddha, and the like. 9- Manufacturing or promoting or trading in intoxicants. 10- Means that lead to immoral actions such as adultery, homosexuality and gambling, or running houses and places where evil and immoral actions may be committed. 11- Manifest bid’ah (innovation), such as venerating certain times and places for which there is no sanction in sharee’ah, or celebrating innovated, un-Islamic festivals and occasions. 12- Practising witchcraft, magic and trickery in order to consume people’s wealth unlawfully. 13- Cheating in weights and measures.” More