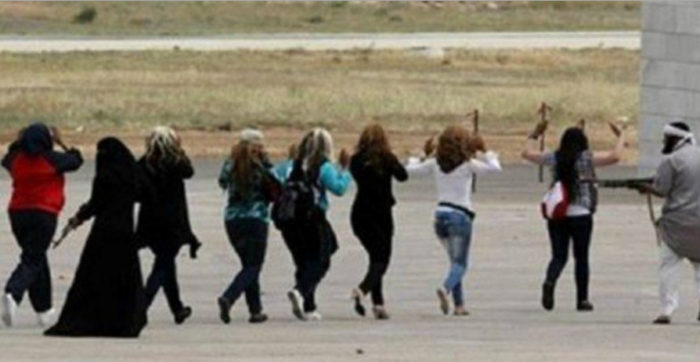 Thank you Hillary & Obama. Your Arab Spring has done great things for women and girls…

TGP: The backwards barbarians of the Islamic State are selling women on smartphone apps.

The advertisement on the Telegram app is as chilling as it is incongruous: A girl for sale is “Virgin. Beautiful. 12 years old…. Her price has reached $12,500 and she will be sold soon.”

The posting in Arabic appeared on an encrypted conversation along with ads for kittens, weapons and tactical gear. It was shared with the Associated Press by an activist with the minority Yazidi community, whose women and children are being held as sex slaves by the extremists.

While the Islamic State group is losing territory in its self-styled caliphate, it is tightening its grip on the estimated 3,000 women and girls held as sex slaves. In a fusion of ancient barbaric practices and modern technology, IS sells the women like chattel on smartphone apps and shares databases that contain their photographs and the names of their “owners” to prevent their escape through IS checkpoints. The fighters are assassinating smugglers who rescue the captives, just as funds to buy the women out of slavery are drying up.

The thousands of Yazidi women and children were taken prisoner in August 2014, when IS fighters overran their villages in northern Iraq with the aim to eliminate the Kurdish-speaking minority because of its ancient faith. Since then, Arab and Kurdish smugglers managed to free an average of 134 people a month. But by May, an IS crackdown reduced those numbers to just 39 in the last six weeks, according to figures provided by the Kurdistan regional government. More.