ISIS Calls For “Slaughter Of Americans” On Election Day 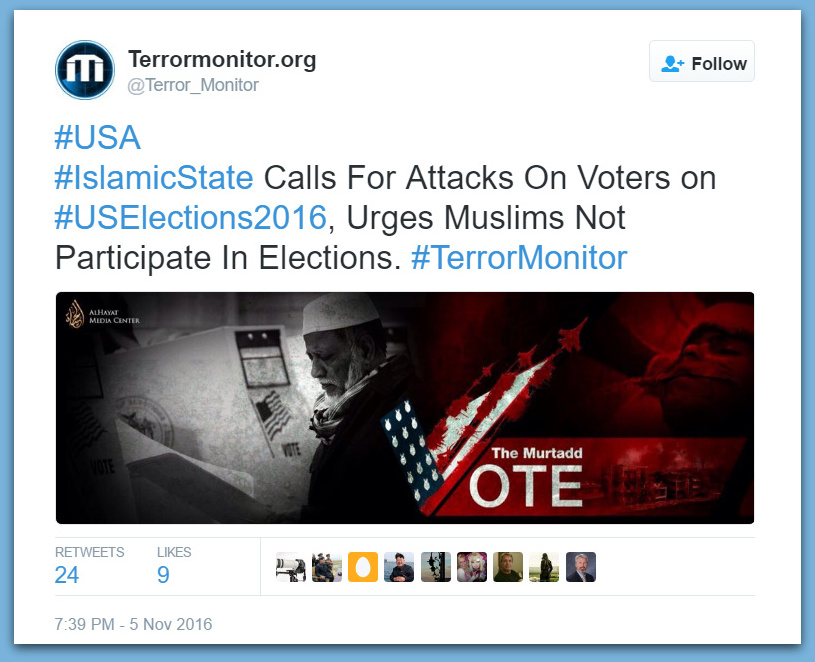 Please keep in mind that Hillary Clinton proposes 500,000 new arrivals from Syria without vetting of anyone. Because “it’s the religion of peace.” Wake up America, while you still can.

The Islamic State is calling for the “slaughter” of U.S. voters on Election Day and demanding Muslims not participate in the democratic process, according to a U.S.-based terrorist monitoring group.

Ritz Katz, director of the SITE Intelligence Group, said Saturday on Twitter that the threats appear in an essay carried by the Islamic State’s Al Hayat media center that declares militants “have come to slaughter you and smash your ballot boxes.”

“May Allah make this year’s U.S. presidential election a dreadful calamity like no other to have struck America throughout its pathetic history,” the seven-page manifesto, entitled “The Murtadd Vote,” read. Murtadd is an apostate who turns his back on Islam.

The essay, which uses lengthy religious arguments in an effort to justify such attacks, also declares there is no difference between the Republican and Democratic parties in their “policies against Islam and Muslims”

Katz posted excerpts on Twitter, saying the Islamic State, also known as ISIS or ISIL, was inciting attacks on Election Day “in an attempt to disrupt the election process and gain media attention.” More

ISIS Calls For “Slaughter Of Americans” On Election Day