ISIS Terrorist Tries To Set Off Bomb, Slashes Priest When It Doesn’t Go Off 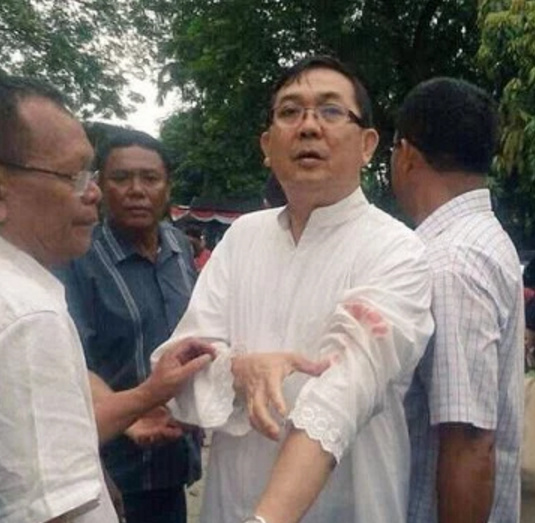 This ISIS suicide bomber did more harm to himself than anyone else thankfully. Luckily the congregation stepped up and detained him.

An ISIS suicide bomber today attacked a Catholic priest with an axe as he tried to blow up hundreds of worshippers at a church during Sunday Mass.

Priest Albert Pandiangan, 60, was holding the holy ceremony at the altar when the 18-year-old fanatic rushed towards him with a backpack bomb and tried to blow himself up.

But the bomb burned without setting off the explosives, so the jihadi pulled an axe from his bag and slashed the priest’s arm at St Yoseph Church in Medan, the capital of North Sumatra in Indonesia.

The congregation then stepped in and managed to wrestle the axe from his grasp, detaining him until the police arrived.

As officers marched the suspect to the car, pictures show his white trousers soaked in blood. Police found his ID card and a hand-drawn picture of the ISIS flag.

The young fanatic also told police that he was not working alone.

He was later pictured at the police station with an officer holding his bloody head off the ground, where he was lying handcuffed.

‘Somebody tried to kill the priest by pretending to attend the church service and at that time tried to explode something, like a firecracker, but the firecracker didn’t explode, it only fumed,’ chief detective Nur Fallah said.

The priest suffered slight injuries and has been taken to hospital near where it happened.

A picture of the attacker’s ID card circulating online said he was Muslim.

In recent years there have been a number of attacks on religious minorities and others in Indonesia, the world’s most populous Muslim-majority country.

A suicide attack in the Indonesian capital in January killed four attackers and four civilians, including a Westerner, and injured 19. More

ISIS Terrorist Tries To Set Off Bomb, Slashes Priest When It Doesn’t Go Off