You either you have a country or you don’t have one. Israel is paying 100 civilians to work on forced migrant deportation squads. The squad members will enforce laws against asylum seekers. -TGP

Haaretz reported: 100 inspectors will be hired over two years, some to work for the voluntary repatriation program and others to enforce laws against asylum seekers and their employers. 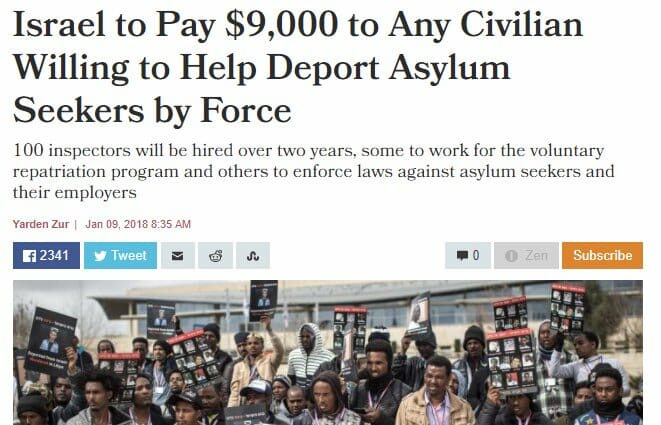 The Population and Immigration Authority is offering a bonus of up to 30,000 shekels ($8,700) to civilians willing to temporarily serve as inspectors in the expulsion of asylum seekers.

On Sunday the authority published a notice that it is hiring 100 inspectors on a temporary basis for terms of two years, from March 2018, as well as 40 investigators for the unit that examines asylum requests.

The notice says the inspectors would work in the greater Tel Aviv area.

FNA: According to the newspaper, the job “would entail holding hearings for the asylum seekers; interviewing and documenting the ones prepared to leave ‘voluntarily’; coordinating and issuing travel papers and coordinating flights; accompanying asylum seekers; and monitoring their re-entry to their countries or origin or elsewhere.”

The others would be involved in the “enforcement of laws against asylum seekers and their employers. Their job would be to find them, record their stories and investigate the employers as well”.

Israel has approved a plan to force asylum seekers to choose between indefinite detention in an Israeli prison or deportation to a third country in Africa.

The migrants were told they had three months to leave, drawing condemnation by activists who stressed that the Israeli’s government move would endanger people’s lives.

According to the Israeli scheme, asylum seekers will be given a plane ticket and up to $3,500 for leaving.

The United Nations on Tuesday called on Israel to scrap a new program forcing thousands of African migrants out of the country, condemning it as incoherent and unsafe.

A great and rational idea in Israel. The US should follow suit. In the United States, the major difference between refugees and asylees is the location of the person at the time of application.

Hannity: I’m Hearing It Was Either Comey Or Mccabe Who Paid For The Phony Dossier! (Video)