Cut off their money and move the UN headquarters to the Gaza strip or a Palestinian held territory.

The next step is working with GOP and Trump to thump the UN for the decision. 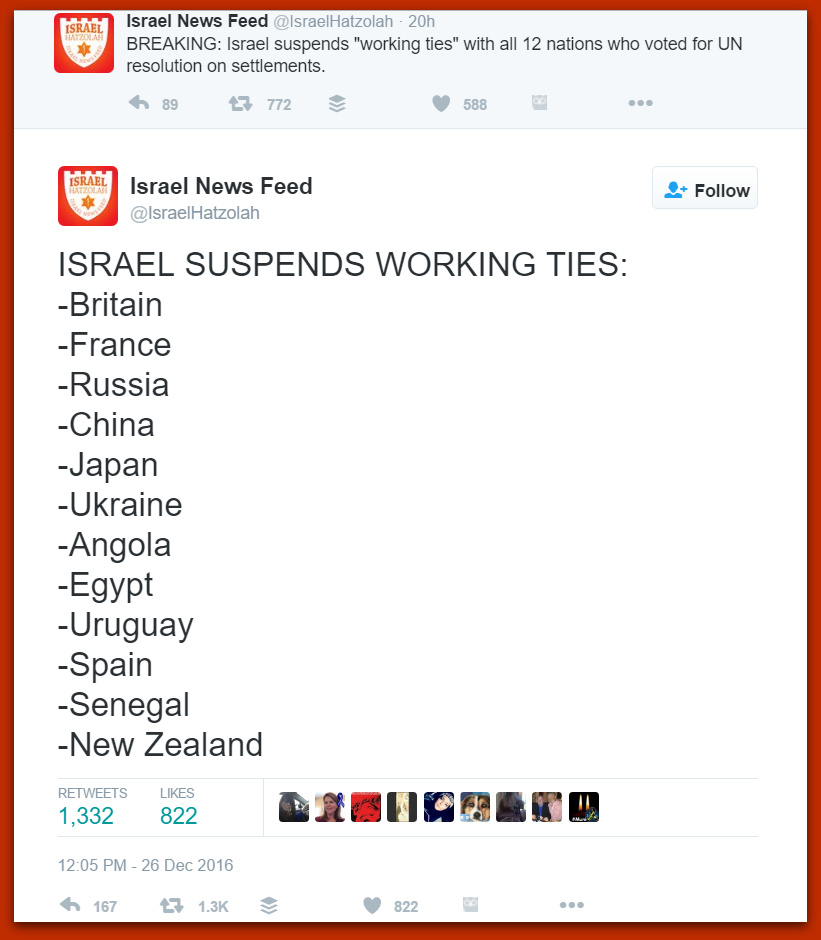 BREAKING: Israel suspends "working ties" with all 12 nations who voted for UN resolution on settlements.

Israeli Prime Minister Benjamin Netanyahu has ordered his nation’s Foreign Ministry to temporarily limit all working ties with the embassies of the 12 UN Security Council members who voted in favor of Friday’s resolution on West Bank settlements and who have diplomatic relations with Israel, two senior Israeli officials tell CNN.

The officials said that business with the embassies of those countries — Britain, France, Russia, China, Japan, Ukraine, Angola, Egypt, Uruguay, Spain, Senegal and New Zealand — will be suspended, the officials said.
Netanyahu will not meet with the foreign ministers of those countries and their ambassadors will not be received at Israel’s Foreign Ministry, the officials added.
In addition, travel by Israeli ministers to those countries will also be limited, the officials said, noting that Israeli ambassadors in the countries will still be able to continue working with the governments of their host nations.
The move came after ten ambassadors were summoned, under orders by Netanyahu, to the Foreign Ministry for a personal rebuke over the vote. Israel was furious at the passage of Security Council resolution 2334, which says its settlements in the West Bank “had no legal validity, constituting a flagrant violation under international law and a major obstacle to the vision of two States living side-by-side in peace and security.” The United States, a Security Council member, abstained on the resolution. More
Tags:IsraelUnited Nations

The media have finally realized that Cuomo and Newsom are terrible. Will voters?
February 26th, 2021 Liberty Unyielding

While You Wait For a $1,400 Stimulus Check, House COVID Relief Bill Will Pay Federal Workers to Stay Home And Get Paid $1,400 Per Week
February 26th, 2021 The Mental Recession
SHARE