Ask yourself, why is President Trump sticking with Sessions? He’s not shy about firing people…

It is obvious to anyone paying attention that Jeff Sessions has no control over the Justice Department.

Jeff Sessions has pretty much surrendered the DOJ to Deputy AG Rod Rosenstein. 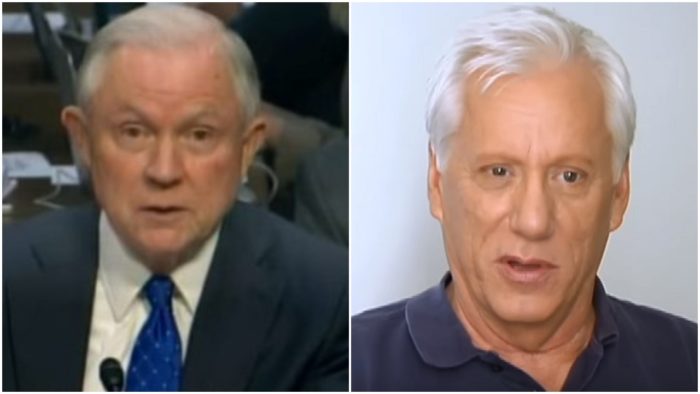 Rosenstein thanked Sessions for the exchange of power by appointing Special Counsel Robert Mueller to carry out a coup d’etat.

AG Sessions has the ability to unrecuse himself and end this Mueller witch hunt once and for all but he continues to sit on the sidelines as Americans watch Mueller take scalps.

Patriotic actor James Woods said what we are all thinking about Jeff Sessions and the Mueller witch hunt.

James Woods tweeted, “So basically we have been without an Attorney General for the duration of this administration. Meanwhile the Democrats and their henchmen are running rampant – destroying files, emails, texts and other evidence. This is a coup d’etat. Make no mistake.”

So basically we have been without an Attorney General for the duration of this administration. Meanwhile the Democrats and their henchmen are running rampant – destroying files, emails, texts and other evidence. This is a coup d’etat. Make no mistake. https://t.co/7NY8EG1a0G

Social media was set ablaze after these new Strzok-Page text messages were released to the public. What is even scarier to think about is the new explosive text messages are a separate batch from the 6 months worth of ‘missing’ text messages.

Imagine what those text messages say about the Trump transition period, Russia dossier and moments leading up to Mueller’s appointment.

We have Strzok admitting the Mueller investigation is a big fat nothing burger.

The most shocking thing we have found out in the new batch of text messages is there was a “secret society” of folks within the DOJ and FBI working against Trump. Read more at TGP.

Would love to see him replaced with Ted Cruz, Trey Gowdy or Jim Jordan! These are “can do” people!

Time for a new attorney general who will COMPLETELY DRAIN THE DEEP STATE SWAMP! #MAGA

Trust Trump in this. Sessions is at work and we’ll all find out just exactly what he’s been up to in the weeks to come. Just because THIS administration doesn’t leak that doesn’t mean no one is working. You don’t want these bad yahoos knowing what Sessions has been doing.

The pace is upsetting, but that’s cause we are amateurs. Jeff is not trying to make arrest, he’s going for convictions. He actually is planing to touch the untouchable. If ppl this powerful are actually convicted it will signal a new reality & it’s happening. Trust Trumps choice.

I fear you are correct my friend, or this is the best game of possum ever. #ReleaseTheMemo #LockThemUp #DrainTheSewer #DrainTheDeepState & #MAGA