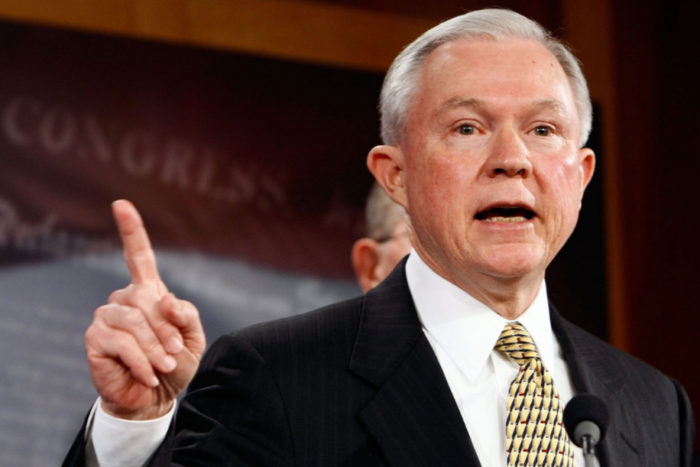 Dear Liberals, Crying at the top of your lungs that Trump is racist or that he’s “breaking up families” is NOT going to work this time. Sorry. The American people are fed up!

I’m really confident that Jeff Sessions will be confirmed and will prosecute sanctuary cities that defy him.

Sen. Jeff Sessions is on record saying so-called “sanctuary cities” that protect illegal immigrants should be prosecuted. He himself may get that chance next year.

Mr. Sessions is president-elect Donald Trump’s pick to be the next attorney general, and if he’s confirmed — a very large if, at this point — he will mark a 180-degree turn from the Obama administration on a host of issues, but nowhere more so than on immigration, where he’s been the Senate’s leading crackdown proponent.

From his first day in office, Mr. Sessions will have the power to strip some federal funding from sanctuary cities, thanks to rulings this year by the Justice Department’s inspector general, who said federal law requires localities to cooperate with immigration agents — and who provided an initial list of a handful of the worst offenders.

“The sanctuary cities thing is huge. I think most jurisdictions are going to fold like a cheap suit,” said Rosemary Jenks, government relations manager at NumbersUSA, which lobbies for stricter immigration laws.

Some sanctuary cities have already said they’ll resist any effort to change their behavior. They are being prodded by immigrant rights advocates who are calling on Senate Democrats to deny Mr. Sessions the chance to be attorney general, saying he represents a massive step backward for the Justice Department.

“The agency would become the dispenser of terror and racial intolerance should Jeff Sessions be confirmed,” said Brent Wilkes, executive director of the League of United Latin American Citizens.

Other advocates stopped just shy of calling Mr. Sessions a member of the Ku Klux Klan.

“The handful of people who might be even less equipped than Jeff Sessions to dispense justice on behalf of the American people typically spend their weekends wearing pointy hats and burning crosses,” said Charles Chamberlain, head of Democracy for America, a liberal pressure group. More