45 million people watched the State Of The Union Address and only 26 million watched the Oscars what do you think of that Jimmy? Maybe it was Hollywood who is unpopular or was it just you?

This week, the Oscars suffered their worst ratings in the history of the Hollywood award show. What used to be a celebration of the craft, has turned into a carnival show of Communist barkers and radical leftist ideologues. Jimmy Kimmel, of course, with his rabid anti-Trump views, was chosen to be the ringmaster of this year’s embarrassing spectacle. It would appear to anyone who’s paying attention that the Trump curse has hit Hollywood, and it’s not going away anytime soon… 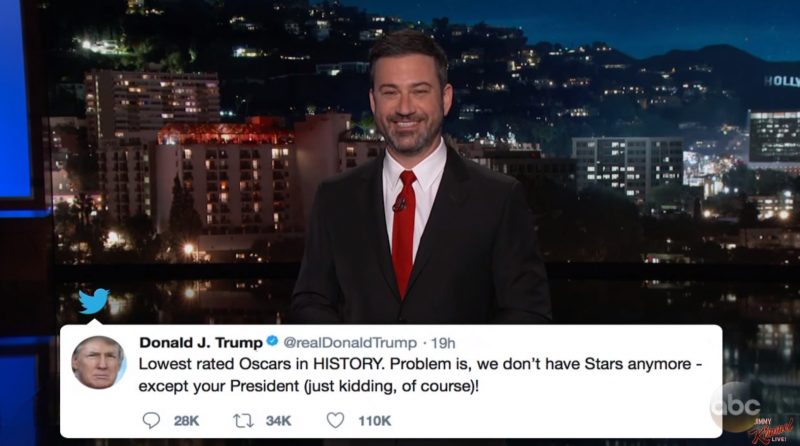 President Trump tweeted about the dismal ratings for the anti-Trump industry yesterday: “Lowest rated Oscars in HISTORY. Problem is, we don’t have Stars anymore – except your President (just kidding, of course)!”

Lowest rated Oscars in HISTORY. Problem is, we don’t have Stars anymore – except your President (just kidding, of course)!

An already defensive Kimmel fired back with this bit of fake news, “Thanks, lowest rated President in HISTORY.”

Actually, according to Rasmussen, one of the most accurate pollsters of the 2016 election, Trump is sitting at a healthy 48 percent job approval rating, and as of late has polled higher than former-President Obama did at this exact same time in his failed presidency.

This time Kimmel actually tried to explain why he hit a record low. The only problem is that his explanation is simply not true.

“The truth is,” Kimmel said, “every year since Netflix happened, the ratings are down for every big TV show: the Super Bowl, the Grammys, the Emmys, the Golden Globes.” – Breitbart

Actually, President Trump’s approval ratings are at a record high for this point in his term, well above Obama’s.

You may not like to hear this truth Jimmy, but, facts are facts. Tried being fair for a change. Your ratings might go up. pic.twitter.com/MC8yDJzJ2V

Who would have thought most people would choose to boycott watching another fake anti-Trump hate fast, like the #Oscars? 😂😂 https://t.co/a5V4f5bXQF?amp=1

Actually that isn’t accurate…in fact the last president had lower ratings. Oh yeah, I forgot, that’s because everyone in America is racist.

NYPD Is Prepared To Make An Arrest On Weinstein