Once a traitor, always a traitor. And his big narcissistic mouth is going to get encourage terrorism and get more people killed. Just another Obama criminal enterprise associate.

John Kerry met with a top Palestinian official in London recently. He told the Fatal leader to stay strong because Trump will not be in office long.

Kerry also hinted that he may run for office again. 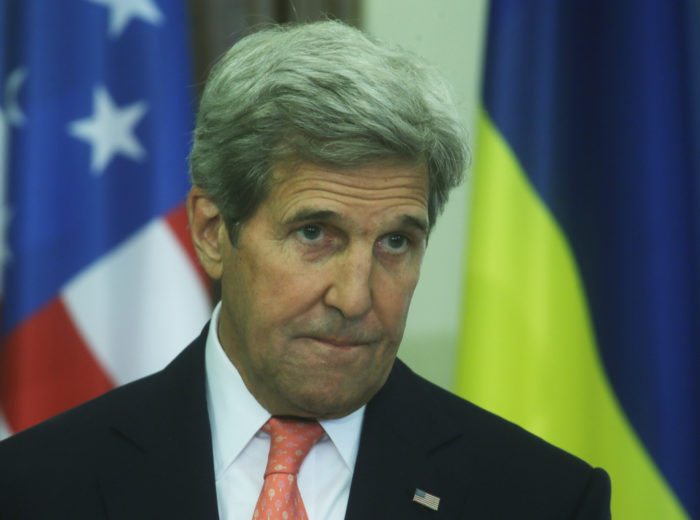 Kerry negotiated against the Israelis in a nuclear deal with Iran.

The Iranian regime was given billions of dollars from the Obama administration and immediately began investing in more military operations. Read more at TGP.

The Jerusalem Post reported: Ma’ariv reported that former US Secretary of State John Kerry met in London with a close associate of Palestinian Authority President Mahmoud Abbas, Hussein Agha, for a long and open conversation about a variety of topics. Agha apparently reported details of the conversation to senior PA officials in Ramallah. A senior PA official confirmed to Ma’ariv that the meeting took place.

Agha is one of Abbas’s closest associates and one of the veteran peacemakers with Israel. He conducted the “London Track,” secret negotiations held from 2010 to 2013 between the emissaries of Netanyahu, attorney Yitzhak Molcho and Brigadier General Mike Herzog, under the supervision and presence of Dennis Ross. Agha also authored with Yossi Beilin the Beilin-Abbas agreement in the 1990s. He is considered a staunch supporter of the peace process, very close to Abbas, and maintains an extensive network of contacts with many elements, including Israelis.

During the conversation, according to the report, Kerry asked Agha to convey a message to Abbas and ask him to “hold on and be strong.” Tell him, he told Agha, “that he should stay strong in his spirit and play for time, that he will not break and will not yield to President Trump’s demands.” According to Kerry, Trump will not remain in office for a long time. It was reported that within a year there was a good chance that Trump would not be in the White House.

One social media user wonders if this is a violation of the Hatch Act? Not that it would matter to Democrats.

John Kerry just made a statement attacking Trump which reminds us of his treason against America by meeting with Viet Cong in Paris. Worthless democrat never changes.

Let’s open another investigation in @JohnKerry violating the Logan Act. Watch your back @realDonaldTrump people are now encouraging terrorist to attack you.

Is this the perfect violation of the Logan Act? Conducting foreign policy in an attempt to thwart our POTUS! John Kerry was a terrible candidate in 2004 and will be even worse in 2020. I would love to watch President Trump debate him. What nickname do you think POTUS would give him?