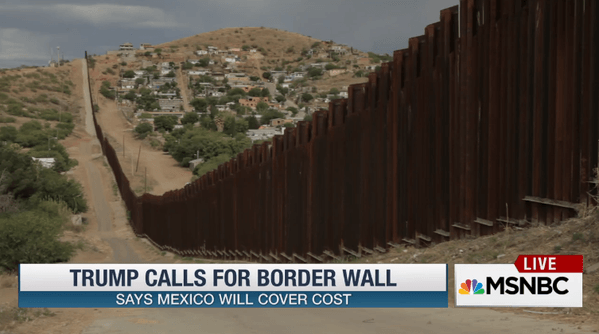 At least Jorge Castañeda can see several actual ways to make Mexico pay for Trump’s border wall. Do you think Trump will actually build the wall though?

Jorge Castañeda, who served as Mexico’s secretary of foreign affairs from 2000 to 2003, and who is currently a professor at New York University, appeared at the Hudson Institute in Washington on Wednesday. Castañeda, who cuts a debonair, cosmopolitan figure, exploded a couple of bits of received wisdom in his address.

Castañeda is certainly no fan of Donald Trump—he said that the property magnate’s ascension to the U.S. presidency would be a “tragedy.” Yet he also said that Donald Trump could quite easily “make Mexico pay” for a border wall—a claim that has been widely ridiculed by our betters in the media.

Castañeda also suggested that Trump could tax remittances from the U.S. to Mexico: “There are ways of doing it,” he said, “transaction fees, commissions, special fees etc.” He labeled a recent resolution in the Mexican Senate to bar the use of Mexican federal funds for construction of the wall as “silly.” (Somebody tell Castañeda’s old boss!)

Earlier in his address, Castañeda dissembled another bit of received wisdom—that Mexican immigration into the United States has “reversed.”

“There’s a fallacy involving the [Mexican immigration] situation . . . that well-intentioned American experts have sold people on,” he said. “This is this famous ‘net zero immigration from Mexico’ thing: [The notion that] all of the sudden a few years ago all of the Mexicans in the United States started going home, and Mexicans in Mexico stopped coming here, so now we have net-zero.