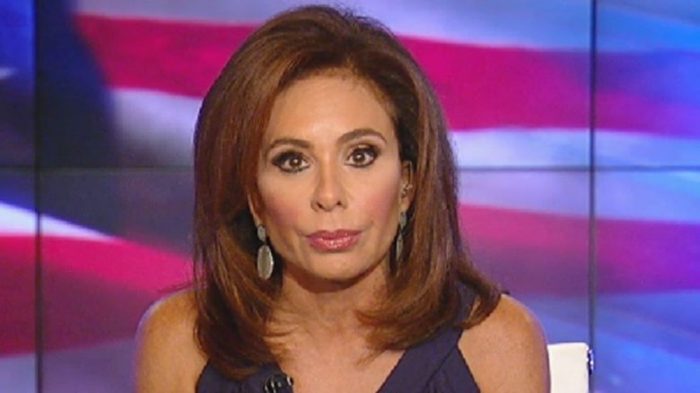 Judge Jeanine is absolutely right about Hillary. She cares nothing about women. Her actions definitely speak louder than words.

“The presidential election in 38 days comes down to the battle of political corruption versus truth—where one candidate chooses political correctness, [and]the other [is]brave enough to state the obvious,” Pirro said on “Justice“.

“One says things not politically correct: not run through the prism of the contemporary political lens. The other…carefully filters [her words]and then flat out lies to [our]faces,” Pirro said, pointing to Hillary Clinton.

Pirro particularly criticized Clinton for claiming to be a champion for women and families.

“You tell me what’s worse—name-calling or lying to grieving parents as their sons’ bodies lay cold in caskets…and then turning around and calling those parents liars,” she said, referring to allegations by Benghazi victim Sean Smith’s mother Patricia, who said Clinton lied to her about the circumstances of her son’s death.

“And although [Donald Trump] may be impolitic, and while I am not a fan of things he said 20 years ago about a woman—under a contractual obligation to maintain her appearance—your history with women is about destroying them,” Pirro continued.

“You don’t support women, you destroy them—whether it’s all the women who’ve accused your husband of serial marital infidelities, sexual harassment, and yes—rape. Instead of protecting a 12 year old, a college intern, a rape victim, you job: ruin them. Destroy any woman who gets in the way of your ambition. None of it [is]the predator’s fault.”

“What’s important are not words,” Pirro said, referring to Clinton’s repeated criticisms of Trump’s language, “what’s important are actions…how one candidate has chosen to lie about issues that involve the government of the greatest nation on Earth.”

“She’s gaming you, folks,” Pirro said to the audience, “she takes money from countries who stone women for adultery…this woman has corrupted the State Department, the Department of Justice and—now I’m ashamed to admit—the honored tradition of the Federal Bureau of Investigation.” More