Judge Jeanine Urges Americans to Protect Themselves: ‘Get A Gun’ 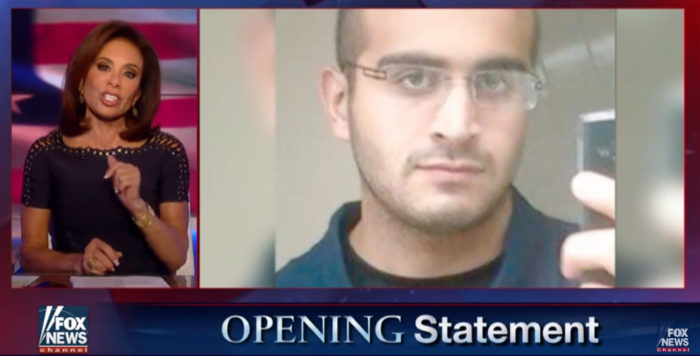 She is right once again, so go ahead and tell it just like it is! It takes a real hero these days to speak the truth, and Judge Jeanine is truly a hero.

It’s real simple. You don’t like America. You want to cheer as the World Trade Center comes down. You want to meet with a known suicide bomber?

Ok – then you’ve given up your rights at the altar of American freedom.

Any rights you had take a back seat to our national security. If you’re on a no-fly list, a terror watch list, if you’re under a terror investigation – you have no Second Amendment right, you cannot buy a gun and you cannot fly on a plane. Period.

We cannot allow you to do this to us again. And we will not allow you to use our Constitution as a shield while you put our loved ones, our neighbors and our nation in danger or worse.

Look, our government is simply not doing enough with the information it has. Federal agencies don’t always share information with local law enforcement unless there’s a joint terrorist task force. And even then agency competition and all that goes with it hurts investigations.

Laws must be changed. We saw it when the FBI investigated the Boston bombers, and were too blind to connect the dots where Homeland Security simply allowed Tamerlan Tsarnaev to fly back and forth to Chechnya

That same FBI interviewed Mateen – the Orlando shooter – three times. Mateen told them his anti-American comments were simply a response to what he perceived as anti-Muslim comments. He was turning the tables on us while basically tapping into our politically correct islamophobic guilt. Part of the reason for closing the case was that Mateen was a security guard, so he must be ok.

I’ve always been a fan of Jim Comey’s. But I couldn’t believe this one when I heard it.

I don’t want to hear there’s nothing the FBI could have done differently, especially when they keep telling us more terror attacks are coming.

So you just sit back and say we couldn’t stop it?

We don’t want to hear this nonsense that to do so might alert a terrorist and harm an investigation. Hell, the FBI visited Mateen three times. You don’t think he knew he was being watched?

And pray tell why does the FBI even remove people from a terror watch list? If there’s no probable cause to make a criminal case, then don’t arrest the guy!

But don’t use our freedoms as a rationalization to free people up who want to kill us and take them off the list.

So, you don’t have probable cause to charge them with a crime. That doesn’t mean that you can’t keep them on a watch list based on reasonable suspicion – a lesser standard of proof. Hell, the NSA’s got all our metadata and know everything about the rest of us. Why can’t you have a list? You’re not locking them up, you’re not convicting them of a crime, you’re not jailing them. You are simply stopping them from buying a gun.

And what’s with this nonsense that words like Sharia and jihad are scrubbed from the FBI’s lexicon and intelligence reports? You guys are so hogtied you don’t have the ability to even think logically anymore.

And for the rest of us, I’ve told you this before – after San Bernardino. Take a look:

I’m telling you this again. Get a gun. Because this government ain’t in a position to help. More

Up to 70% Of 'Child' Migrants In Sweden Are Really Adults

Judge Jeanine Urges Americans to Protect Themselves: ‘Get A Gun’