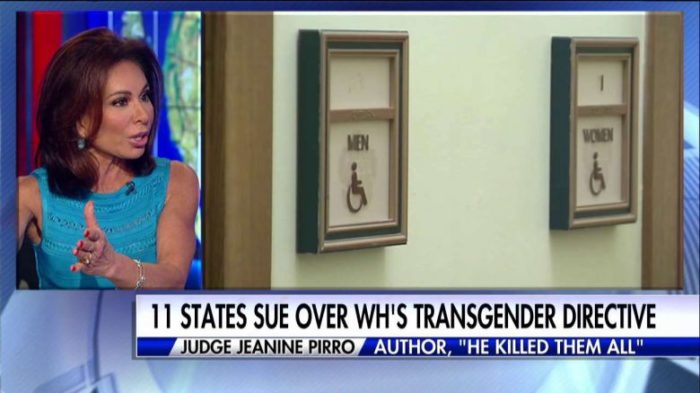 Obama’s bathroom directive is a joke. Our kids should not be subjected to this. They should be safe in schools not be scared to use the bathroom or locker rooms.

In a letter sent to public schools, the Obama administration said that students must be allowed to use the bathroom that matches their gender identity.

If schools refuse to comply, districts could lose federal funds.

The administration argues that Title IX of the 1964 Civil Rights Act – which prevents discrimination based on sex – can be applied to transgender students’ access to bathrooms in public schools.

Judge Pirro said there is no legal precedent for the directive and it does not have “the force of law” behind it.

“The president lacks the authority to do this. This is a continuation of [Obama’s] cultural changes by executive order,” she said, arguing that the matter should be handled on a case-by-case basis by schools if problems arise.

Pirro asked what will stop kids from deciding on a whim that they want to go into the bathroom of the opposite sex on a particular day.