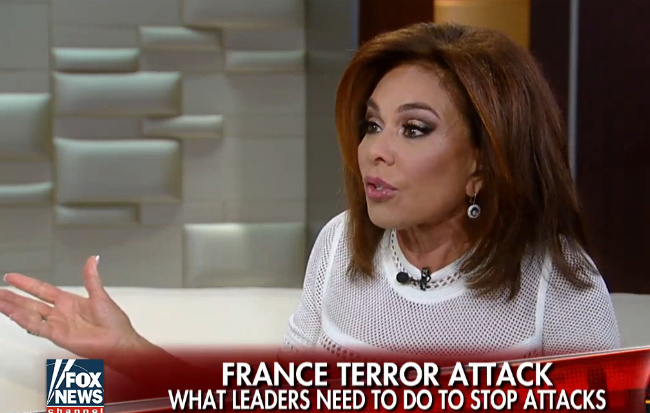 Judge Jeanine: “Right now, they are here, they’re going to kill us — women, children, it doesn’t matter. We have got to declare war on them. We’ve got to start having a conversation about surveillance in mosques. We’ve got to make sure that in the jails these imams are going in and radicalizing people, they just want to kill us.”

TDC: Appearing on  “Fox & Friends,” Pirro said, “We have a president who is an apologist. Look, I’m an amateur and in June of 2014 when I first heard about ISIS, I said bomb them, bomb them, and bomb them again. I took some heat, but I was right. They were the JV team then. If we had done something, if this president would stop apologizing for what we do and what we are and stop saying you Christians, it’s your turn, as he did at a prayer breakfast, then maybe America would be united in a way where we understand that they’re coming. They’re here, we’re next!”

“I’ve got to tell you, I’m as aggravated as everyone who sat in this chair today,” Pirro said. “If we have people standing in the blood of innocent victims who go for an innocent celebration, then we have got to recognize that we have a problem at the top of this country.” More