Judge Nap: Clinton Foundation Case Would Be Easier for FBI to Prove 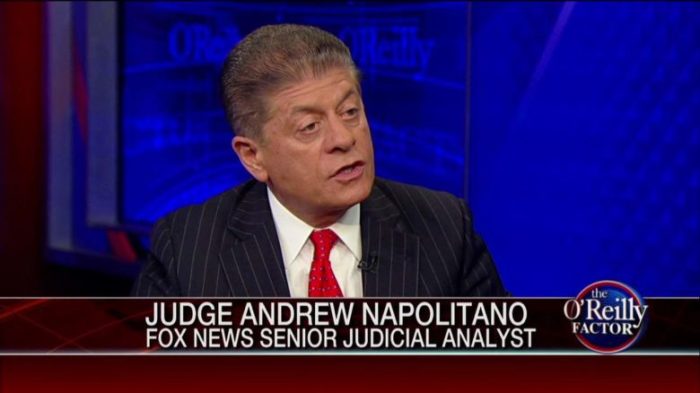 A new batch of Hillary Clinton’s emails is raising questions about a possible “pay-to-play” scenario involving the State Department and the Clinton Foundation.

At issue is whether Foundation donors got preferential treatment from the State Department during Clinton’s tenure as secretary of state.

Donald Trump, speaking in Virginia today, called it a “pay-to-play” scheme run by the Clintons.

Conservative watchdog Judicial Watch released 44 new email exchanges which it says were not in the original 30,000 handed over to the State Department, despite the Democratic presidential nominee’s claims she turned over all work-related emails amid the now-closed probe into her private server use.

The documents, produced as a result of the group’s FOIA lawsuit, appear to challenge Clinton’s insistence that there is “no connection” between her family foundation and her work at the department.

Judge Andrew Napolitano, Fox News senior judicial analyst, weighed in on The O’Reilly Factor tonight, saying there was a “regular, consistent pattern” of foreign governments and individuals asking for favors.

He said Mrs. Clinton was allowed to grant such favors, but afterwards, huge donations flowed to the Foundation or in other cases, huge speaking fees were paid to Bill Clinton.

“This is a very, very serious allegation of public corruption,” he said, adding that he believes this case would be “easier to prove” for the FBI than charges in the email scandal would have been.

He also said this case is easier for the public, and potentially a jury, to understand. Napolitano said that if the Justice Department were “serious,” they would indict some of the people who received favors.

The judge said if more emails keep coming out, after Clinton said under oath that she surrendered them all, then perjury charges could be pursued by a future DOJ.

The judge said he thought FBI Director James Comey was a “straight-shooter” but he no longer feels that way after the recommendation against prosecuting Clinton over her emails.

Watch the full segment above.

Judge Nap: Clinton Foundation Case Would Be Easier for FBI to Prove