Judge Nap: Hillary Is ‘Maintaining the Facade That She’s Been Telling the Truth’ 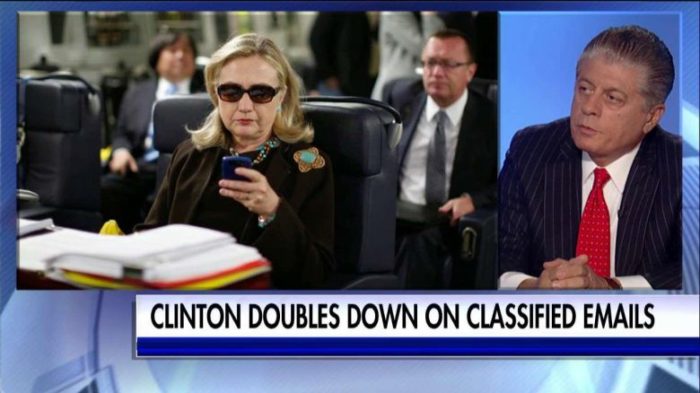 Hillary will never admit she is a liar even when she is caught red handed in a lie. That’s what liars do. They lie no matter what the consequences are.

Judge Andrew Napolitano said that Hillary Clinton continued to “maintain the facade that she’s been telling the truth” in her “Fox News Sunday” interview.

He explained that while discussing the FBI investigation into her private email server, Clinton told Chris Wallace that FBI Director James Comey said she had been “truthful.”

Judge Napolitano said it is a fact that Clinton sent or received more than 100 items that were marked “secret” or “top secret,” of which five had the most classified marking, “Select Access Privilege.”

He explained that to send, receive or open those items, Clinton would have had to enter a continuously changing alpha-numeric code.

“It is inconceivable that she could have done that without knowing and intending to receive or open it in her non-secure, non-government-issued mobile device via her non-secure, privately owned server in her home.”

Judge Napolitano said that as secretary of state, Clinton also had the legal obligation to recognize classified information whether or not it was marked.

“She told Chris Wallace yesterday that if she sent something that was secret in her email, it was marked ‘secret’ after she received it and after she sent it,” Judge Napolitano said. “That’s baloney. She had the obligation to know it when she saw it.”

Get more insight from the judge above.

Judge Nap: Hillary Is ‘Maintaining the Facade That She’s Been Telling the Truth’