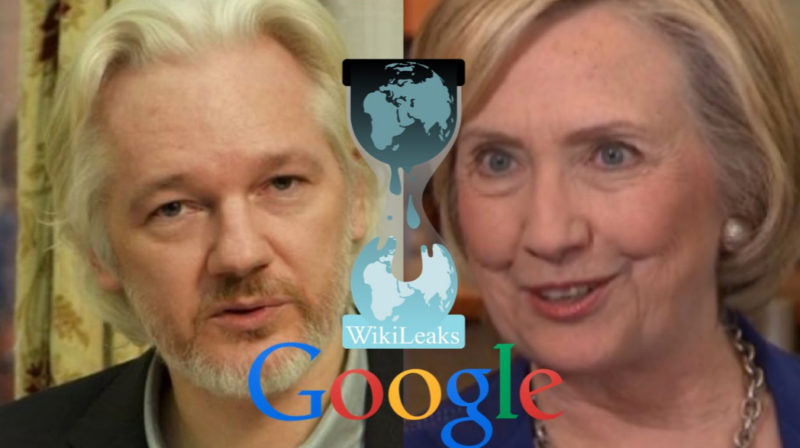 And this surprises who? Hillary and Google are both on the very same team… the starting lineup for our globalist masters.

Recode: Julian Assange is no Google fan. He doesn’t like Hillary Clinton much, either.

And early yesterday morning, the founder of Wikileaks was supposed to unleash a fresh batch of leaked (or stolen) documents intended to upend Hillary Clinton’s presidential prospects. Pro-Trump enthusiasts branded the announcement as a can’t-miss occasion that would change the tide of the neck-and-neck race.

But that didn’t happen. Instead, he plugged his book and promised that more documents will be released every week until Election Day, Nov. 7. The documents, Assange said Monday night, will expose damning evidence against a range of powerful entities and issues, like the military, the oil industry, the U.S. presidential race and Google.

Assange’s problem with Google traces back to Eric Schmidt, the former CEO of Google and current chairman of the board, and his ties to the State Department when Hillary Clinton was secretary of state. The Wikileaks founder never liked Google, as a longtime an advocate of a decentralized internet, and he’s also railed against digital surveillance for decades.

But Google became particularly suspect to Assange around 2009, when, according to Assange, the company seemed to be working more closely with the federal government. The purported intersection of the corporate internet superpower with the U.S. government represented the perfect storm for Assange, who wrote a book in 2014 titled “When Google Met Wikileaks,” detailing the company’s close ties with U.S. policymakers. More