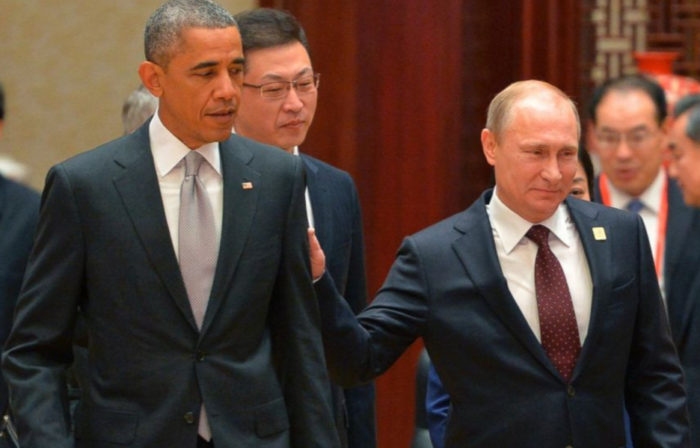 Democrats and the lame-stream media are chronically clueless. It really doesn’t matter who hacked the DNC and Hillary’s campaign. They have only themselves to blame for the contents of those emails.

I remember when Julian Assange was asked if he would leak stuff on Donald Trump. He said he would, but he had nothing worse than Trump had already said. He also said Trump was smart, he never used email himself. This is proof Julian was absolutely telling the truth. There was simply nothing scandalous in the GOP emails.

The Democrats and mainstream media are still pushing two theories on why Hillary Clinton got shellacked in last month’s election.

1.) Russian intelligence under the order of Putin hacked into John Podesta’s emails and released thousands of damning emails from the Hillary Campaign that proved they were anti-Catholic, racist, humorless, political hacks (except for Neera Tanden) who plotted against Bernie Sanders before the primary started. The damning emails also proved without question that the partition between the media and Democrat Party has been removed completely. Today the two entities are branches of the same organization.

Hence, Putin stole Democrat emails, released them to Wikileaks and now the entire world knows how damn corrupt, dishonest and nasty Democrats really are.
Putin is the devil.

2.) Theory two is much simpler: Trump voters are racist, white supremacists – Especially the white Rust Belt turncoats who voted for Obama twice but then voted for Trump over Hillary Clinton. They are belly of the snake gutter racists.

On Friday the Washington Post reported President Obama had ordered a “full review” due by the end of his presidency on allegations of Russia’s hacking to influence the election.

Intelligence agencies have identified individuals with connections to the Russian government who provided WikiLeaks with thousands of hacked emails from the Democratic National Committee and others, including Hillary Clinton’s campaign chairman, according to U.S. officials. Those officials described the individuals as actors known to the intelligence community and part of a wider Russian operation to boost Trump and hurt Clinton’s chances.

“It is the assessment of the intelligence community that Russia’s goal here was to favor one candidate over the other, to help Trump get elected,” said a senior U.S. official briefed on an intelligence presentation made to U.S. senators. “That’s the consensus view.”…

…The Trump transition team dismissed the findings in a short statement issued Friday evening. “These are the same people that said Saddam Hussein had weapons of mass destruction. The election ended a long time ago in one of the biggest Electoral College victories in history. It’s now time to move on and ‘Make America Great Again,’ ” the statement read.

… Intelligence agencies do not have specific intelligence showing officials in the Kremlin “directing” the identified individuals to pass the Democratic emails to WikiLeaks, a second senior U.S. official said. Those actors, according to the official, were “one step” removed from the Russian government, rather than government employees. Moscow has in the past used middlemen to participate in sensitive intelligence operations so it has plausible deniability.

Julian Assange, the founder of WikiLeaks, has said in a television interview that the “Russian government is not the source.”…

…Some key Republican lawmakers have continued to question the quality of evidence supporting Russian involvement.

“I’ll be the first one to come out and point at Russia if there’s clear evidence, but there is no clear evidence — even now,” said Rep. Devin Nunes (R-Calif.), the chairman of the House Intelligence Committee and a member of the Trump transition team. “There’s a lot of innuendo, lots of circumstantial evidence, that’s it.”

What the media omits from their reporting is that the Republican Party was also hacked around the same time this year.

The GOP emails were later posted on the DC Leaks website.

Of course, these emails didn’t receive much attention because there was nothing in them.

So why does this never make into the liberal media reports?

This obviously doesn’t fit their “Putin stole the election from Hillary” narrative.