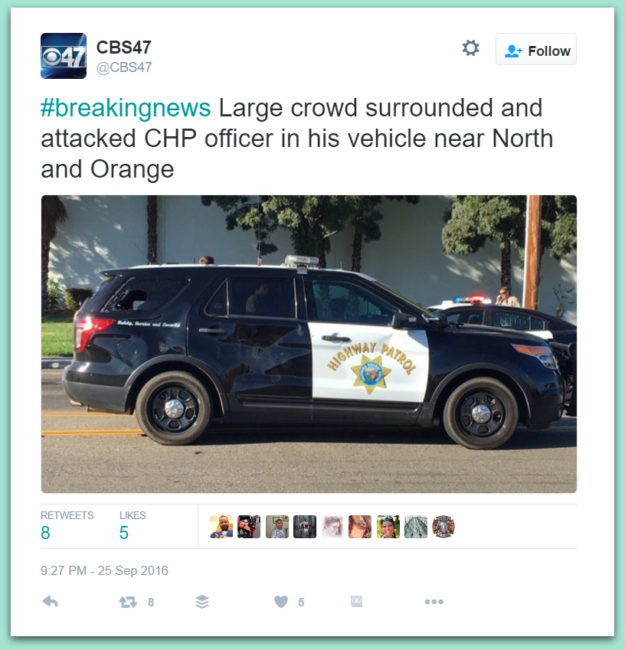 #breakingnews Large crowd surrounded and attacked CHP officer in his vehicle near North and Orange pic.twitter.com/SKdOp0Xp5e

Yeah, because street racing doesn’t kill people, right? Just wait until Trump wins and unleashes the cops on these domestic terrorists. Trump calls himself the law and order candidate. Once he has the authority these savages are going to find out exactly what he means.

The crowd reportedly involved people street racing. Pretty darn discouraging when a crowd can basically make it a ‘no-go’ area for police, for fear of their own safety.

Dozens attack a California Highway Patrol vehicle in Fresno Sunday afternoon, as an officer sits inside.

The attack happened at the intersection of North and Orange Avenues in Southwest Fresno Sunday afternoon around 3:40. Police say a group of about 40 people were putting on a sideshow, driving around recklessly and doing tricks in their car. The group’s show blocked off the intersection and drivers were halted.

“The vehicles parked all around the intersection and traffic backed up,” Fresno Police Lt. Mindy Casto said.

The CHP officer was patrolling the area when he saw the large group. The officer tried to pullover one of the vehicles burning donuts in the intersection. When the officer returned to his vehicle, the dozens then surrounded the car and began striking, kicking and yelling. Within seconds, the group caused up to $12,000 worth of damage, destroying several windows. Police say the first strike was right next to the officer, on the driver’s side window. More

NSA Analyst Says The FBI Investigation Of Emailgate Was A Sham