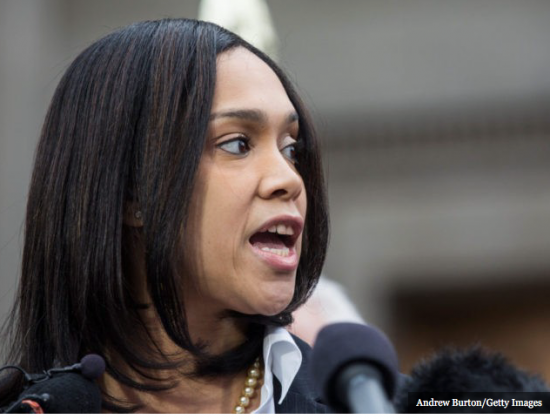 Finally someone is seeing Marilyn Mosby for the true democrat she is. She is just another Obama follower promoting minorities no matter what the cost is.

An ethics complaint has been filed by a George Washington University law professor against Baltimore State’s Attorney Marilyn Mosby, asking the Maryland Bar Association to disbar her because of misconduct in her ill-fated indictment and prosecution of six police officers in the Freddie Gray case.

The complaint calls for an investigation into Mosby’s conduct connected with her prosecution of the cases on several grounds, including:

Mosby’s indictments of the police officers were suspect from the beginning. Politically motivated, unjustified and made in response to the demands of Black Lives Matter and members of the radical black community, the 35-year-old, inexperienced and incompetent prosecutor stood before the press and the city that elected her, quoted the Al Sharpton line “No Justice, No Peace,” proclaimed that “our time has come,” and charged six officers with a string of criminal charges that stunned the Baltimore legal community. (Full disclosure: The Law Enforcement Legal Defense Fund, of which I am Chairman, is helping to financially support the legal fees of the six Baltimore police officers.)

But things are quickly coming apart at the seams for Mosby, a situation brought about by her own doing. The first case she brought to trial resulted in a hung jury. Next, she was excoriated by the judge for withholding exculpatory evidence. Then the second and third cases, tried to the judge, were returned with acquittals on every charge, on the basis that she had insufficient evidence to prove her case. Then two of the officers filed a civil suit against her for defamation and invasion of privacy. Now a very credible complaint calling for her disbarment must be addressed and investigated by the Maryland Bar Association, perhaps ending in her disbarment. More