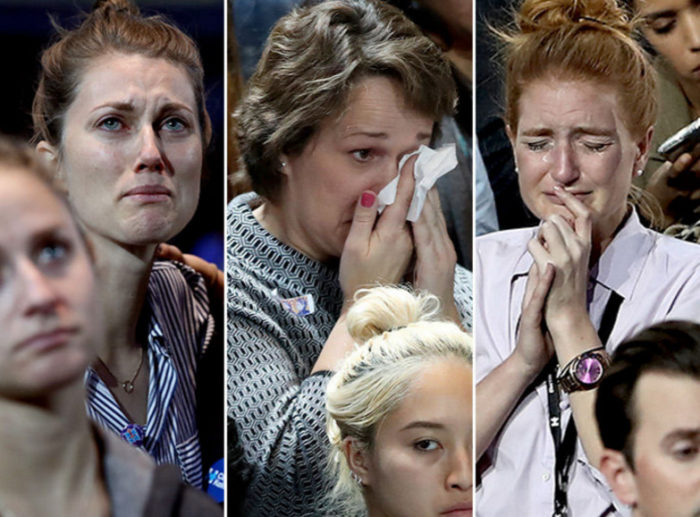 I want the liberals to continue with all the whining and throwing of crybaby temper tantrums, because it fits them so well. That PSA of semi celebrities, was nauseatingly hysterical. They looked as if they were begging for food or something. The thing that was missing, other than accuracy, were tears…

The Democratic Party’s response to their recent shellacking in the November 2016 elections is to blame the results on everything but their terrible candidate and destructive policies.

Democrats first blamed the 10% of the media that they don’t control as the reason for their demise. This is in part true.  Americans by the millions went to sites like this one to obtain fair and unbiased news reporting during this election cycle.  At the same time WikiLeaks released Hillary campaign manager John Podesta emails that showed that the Democrats have nearly total control of the media.  The Democrats believe if they stop free speech all together they can then win elections.  They don’t consider changing their positions.

Democrats next asserted that the elections were rigged, agreeing with Donald Trump. They enlisted the services of Green Party candidate Jill Stein to request recounts in Wisconsin, Michigan and Pennsylvania.  This did not work and it supported Trump’s assertion that the elections are rigged and Democrats are doing the rigging.  (See Detroit and Nevada for examples.)

The Democrats next blamed Russia for interfering with the election and giving Trump the win. This insanity puts not only the US election process in peril, it also puts the US relations with Russia back to the Cold War era.  If the Russians wanted a particular candidate to win in this year’s election, it was Hillary Clinton.  She gave them the Russian reset, uranium in the US and an easy rode in their takeover of Crimea, etc.

Finally, the Democrats are trying to overturn the election by requesting that the Republican Electoral College candidates vote not for Trump but for anyone else – they are not saying vote for Hillary, wink, wink…. What arrogant and misguided lefties.  They really do come across as sore dumb losers. More