Flashback: Loretta Lynch Calls For ‘Blood and Death’ in the Streets (Video)

“They’ve Marched… They’ve Bled… And Yes, Some Have Died… We Did This Before… We Can Do This Again!”

Earlier today, Congressman Scalise was shot by an ultra left-wing Bernie Sanders supporter. Is this what Loretta Lynch was talking about when she said brought up the hard work that had to be done even if it requires bloodshed and death to achieve the left’s ideals? 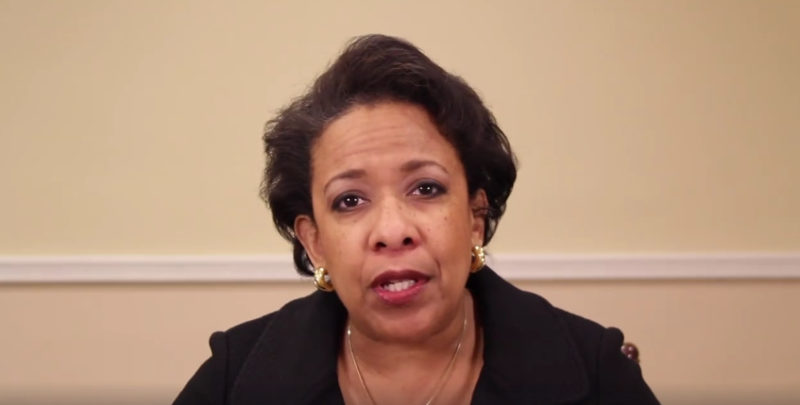 Is former the AG trying to provoke a civil war?  Should Loretta Lynch be arrested for inciting violence and subversion of a sitting president?

100percentfedUp: Obama’s former AG Loretta Lynch released a video that’s a call to action for Democrats. These people who have been stripped of power after being so close to achieving their goals of fundamentally transforming America into something most Americans wouldn’t recognize are serious about starting a civil war in our nation. If you don’t believe me, listen to the words of Obama’s former AG, who compares the fight against President Trump and his supporters to that of the Civil War.

“I know that this is a time of great fear and uncertainty for so many people. I know it’s a time of concern for people, who see our rights being assailed, being trampled on and even being rolled back.  I know that this is difficult, but I remind you that this has never been easy. We have always had to work to move this country forward to achieve the great ideals of our Founding Fathers. (Lynch’s statement about the Founding Fathers is quite ironic, considering that she worked hand-in-hand with former President Barack Obama to destroy the very fabric of our Constitution.) It has been people, individuals who have banded together, ordinary people who simply saw what needed to be done and came together and supported those ideals who have made the difference. They’ve marched, they’ve bled and yes, some of them died. This is hard. Every good thing is. We have done this before. We can do this again.”

HuffPost Writer Calls For Violent ‘Resistance’ Which Is More ‘Organized’

Flashback: Loretta Lynch Calls For ‘Blood and Death’ in the Streets (Video)