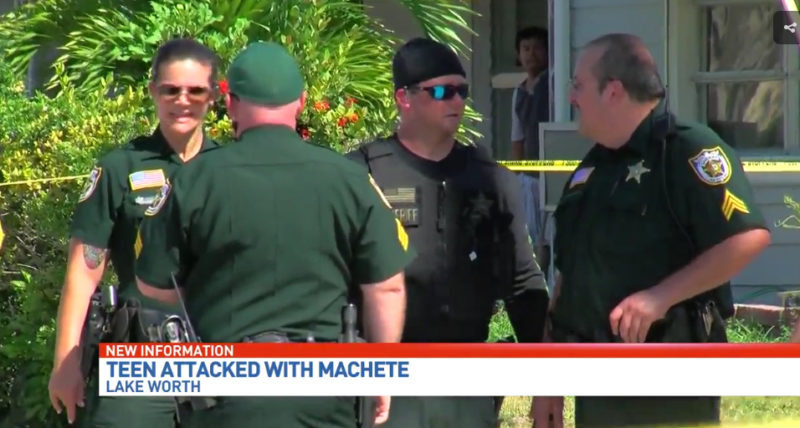 A graphic video is going viral after a thug saw another teen talking to the girl he really liked. It quickly escalated into a nightmare scene when this teen thug went over for a little revenge.

LAKE WORTH (CBS12) — A Lake Worth teen is recovering after his arm was almost severed in a vicious machete attack committed by another teen.

The motive? An impassioned fight over a girl.

The Palm Beach County Sheriff’s Office is following up on leads in hopes of finding the machete-wielding attacker.

Witnesses say nearby Lake Worth High School had just let out for the afternoon on Friday, and a group had gathered on a lot near North A Street and 2nd Avenue North.

The witnesses—including a woman named Sophia who was Facebook-live streaming the fight and subsequent near-dismemberment– reported seeing the suspect slash the victim multiple times. We are withholding Sophia’s full identity per her request. “

“I just see him swinging… you know– three chops,” she told CBS12. Sophia said the saw the teen victim’s arm partially-severed at the forearm area. More

Wow, CNN Assumes 'Black' Is a Synonym For 'Felon'