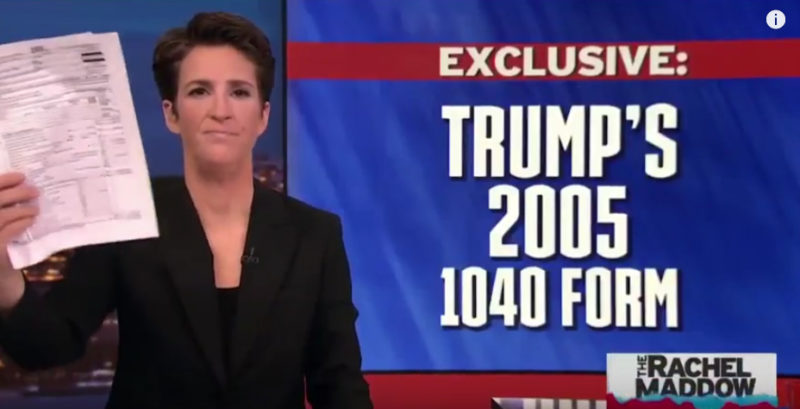 I’d love to see Attorney General Jeff Sessions file charges against her. Would that cause Rachel Maddow to give up her sources and put the media in its place, and get two birds with one stone?

As reported earlier Rachel Maddow stepped on a rake last night after she released Trump’s 1040 tax return form from 2005.

All she proved was that President Trump paid millions in taxes; he paid a higher tax rate than Socialists Barack Obama and Bernie Sanders.

Of course, Maddow will not be laughing when she realizes that by showing his tax returns, she did BREAK the law!

According to the Hill, which is no friend of President Trump, “Disclosing a taxpayer’s information without consent IS ILLEGAL.”

The unauthorized release or publishing of federal tax returns is a criminal offense, punishable by a fine of up to $5,000 and up to five years in jail. Maddow, however, argued that MSNBC was exercising its First Amendment right to publish information in the public interest.

Hey @NBCNews Internal Revenue Code section 7213 makes the unauthorized disclosure of any return or return information is a felony. https://t.co/p9mrsiA4ZQ

Dear Rachel Maddow: While You’re On The Subject Of Taxes… How About Exposing This?